I have several portable shortwave receivers, modern and antique. My favorite modern shortwave is the Sony ICF-2010. I purchased it back in 1989. It was a bit expensive (about $350 as I remember) but I had just received a stipend for participating in an education research project at Brown University and so I had a little extra money. Most of it went to my wife. The balance went for the Sony.

The 2010 tunes the entire HF shortwave spectrum, broadcast AM and FM, and airband. The tuning is digital, it has 32 station memory slots and it has synchronous detection. It was quite advanced for its time and still is considered one of the best portables ever made. That’s how I felt until one day several months ago when I pulled it out of the nightstand and turned it on for some bedtime shortwave listening (SWL). The audio was badly distorted. Click on the video below to hear for yourself.

Switching from batteries to plug-in transformer made no difference. It sounded similar to what happens to my vintage radios when the power supply electrolytic filter capacitors go bad. It’s an easy fix in the old radios because the capacitors are a cinch to spot (and the circuit diagrams are helpful too). But in a modern radio that uses surface mount technology and numerous circuit boards arranged in layers and attached by ribbon cable it can be a nightmare.

First I had to confirm that I was on the right track in suspecting the power supply. I immediately joined the 2010 user group on Yahoo and posted my problem. Fortunately I got a response from Rod, KB8DNS. He not only confirmed that it sounded like a capacitor but he also told me which one (C161) and its value (330mfd @10 volts). Just to be sure I posted a video of my broken radio on You Tube and asked Rod to give a listen. He responded “Yes, that is what it is, the audio capacitor C161, not too far from the volume slide”. An audio capacitor? OK, now how do I get to it? Well, Rod had previously posted a video of him opening a Sony ICF-2010 and replacing C161. I watched the video to get a few hints on how to do the deed. Next I needed the replacement capacitor. There were none in my stock because I usually repair just old radios (low capacitance, high voltage) and this was a modern one (high capacitance, low voltage). Fortunately I had in my junk box (everyone needs a junk box or two) an old circuit board that I pulled from a defunct UPS. I removed two capacitors, both of them 330 mfd @25 volts. They would be fine. I straightened the leads and began taking apart the Sony.

I took the radio apart a bit differently from the way Rod did. He ended up approaching the top of the main board from the front of the radio after removing the front shell of the case. I removed only the back shell of the case which immediately exposed the main board. I then untethered the board and partially flipped it. I took photographs and made drawings as I went so I would not forget anything. All screws that were removed were pushed through punched holes in a manila file folder and properly labeled. The steps were as follows:

Remove 4 screws in corners of case backside
Remove 1 screw in battery compartment and two under antenna
The main circuit board is now exposed. Remove the three screws holding it.
Loosen tape holding blue wire running along battery compartment
Uncoil nest of ribbon cable from cavity near tuning dial (careful!)
Push back plastic spring clamps around periphery of main board while prying up on board
Stand radio on its top edge while pulling out main board with solder pads facing you
Desolder and remove C161 (I recommend a clean solder sucker) and ream PCB through holes with a piece of wire heated by soldering iron
Insert leads for new capacitor (observe proper polarity), holding it tight against board with a rubber band
Solder in the new capacitor
Close everything up in reverse order

The following photographs may  be helpful. Click on them to enlarge and read notations: 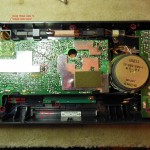 Upon removing the rear cover the main board is exposed. Click to enlarge 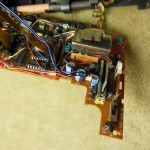 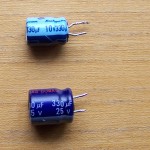 Original capacitor above & replacement below

Of course I could not wait for reassembly to test the radio. As soon as the new cap was in I connected up power to the external DC-in port and turned it on. Nothing. I tried several times, moving the on/off switches around, adjusting the control board fit, etc. It was now a dead radio. I decided to close it up and try batteries. I put in three new D-cells and again there was no life. I was ready to list the radio on eBay as a “dead radio,killed by owner“. Then I noticed that I had not installed the two AA computer batteries. Were they necessary to make this thing run? I couldn’t even remember.

They were just to retain the memory, right? I was grasping at straws so I installed the computer batteries and immediately noticed that the clock came alive. Upon activating the Power and On switches the radio came alive! Every band sounded great. Watch and listen to the above video to see how well it works. The Sony was back!

(Note: It is easy to permanently damage the radio while attempting this or any other repair. Proceed at your own risk. Also, please note that I am just a hobbyist and do not repair radios other than my own.)

Resources:
Sony ICF-2010/2001D user group. This is a very active and helpful group. They even have a file library with the User Manual and a Service Manual that you can download.

Review of the ICF-2010 by Jonathan Marks.

If this blog was useful or interesting, please use the social media buttons below to let others know about it. I also encourage you to use the comment area. Thanks!