Turtles of the Wood River

I decided to go for an easy paddle up the Wood River in Hope Valley, RI. I put in at the Wood-Pawcatuck Watershed Association which is only 2 miles from my home. It is a real nice spot with a ramp, dock, parking lot, and a Porta Potty. What more could you ask for?

The most common feature of the river is its abundant turtle population. They are everywhere. They are also skittish. I usually locate them sitting on driftwood while sunning themselves. I notice that the branches on partially submerged trees always point up at about a 40 degree angle. That’s exactly the pose that the turtles take once they settle down and extend their necks. Here are a few photos of the terrifying turtles of the Wood River: (Note: clicking on any photo will enlarge it.) 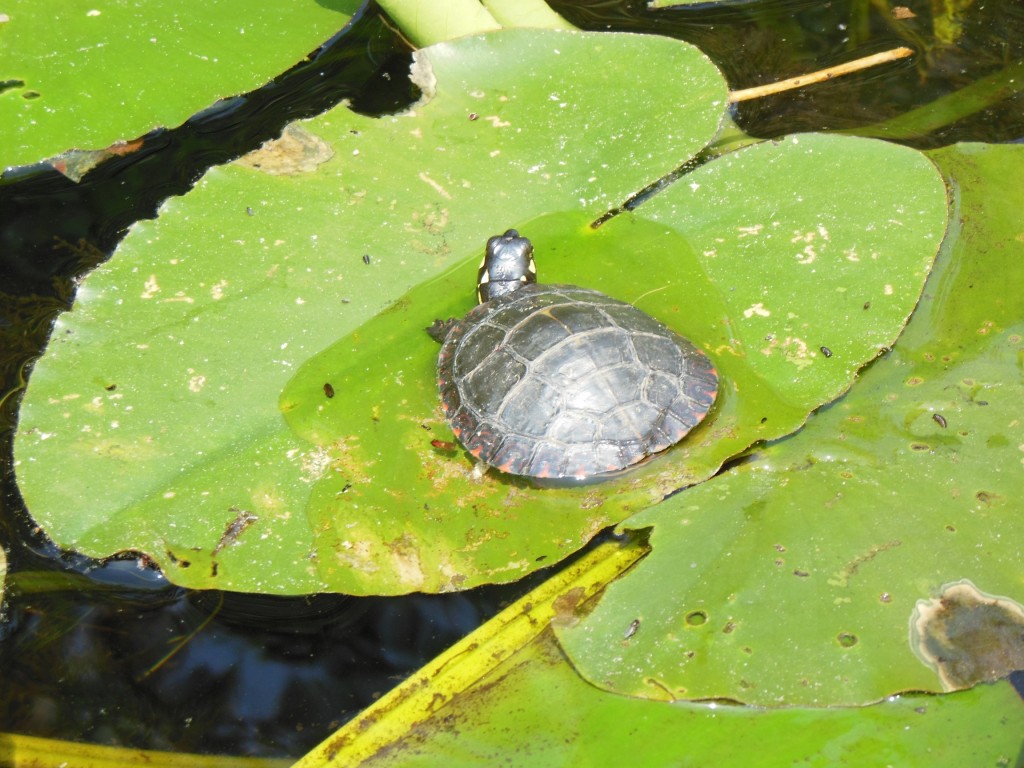 “This is my pad, buster!” This one was small enough to be supported by a lily pad. I wanted a closer shot but he took off before I could react. 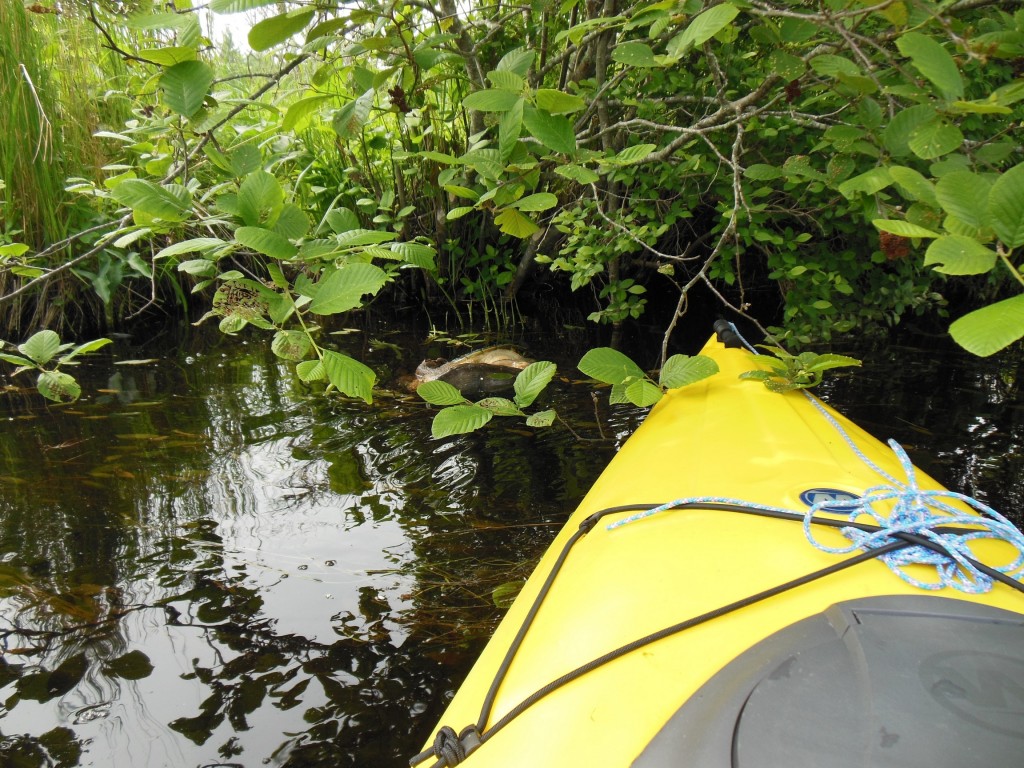 I noticed a strange shape near the river bank. Was it an animal or a piece of Styrofoam? Look closely (click on image). It is two mating snapping turtles. 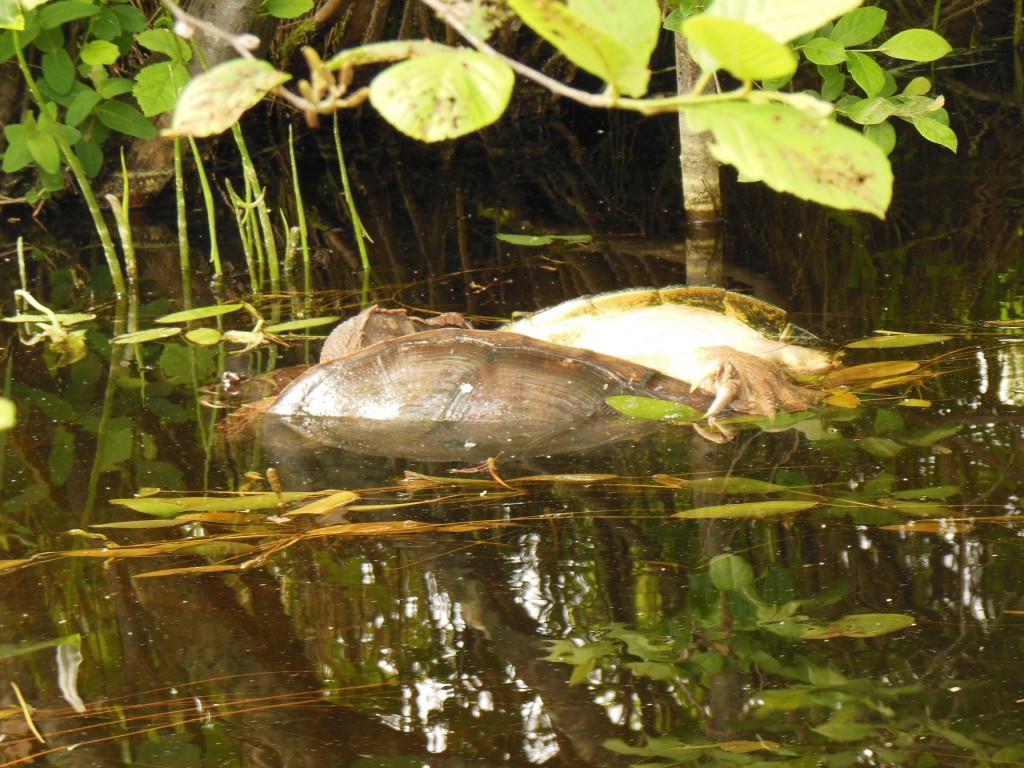 The two snapping turtles were on their sides and tightly engaged. Notice those large claws. I might have taken more photos but what I got was rather poor … these big animals thrashing around spooked me! 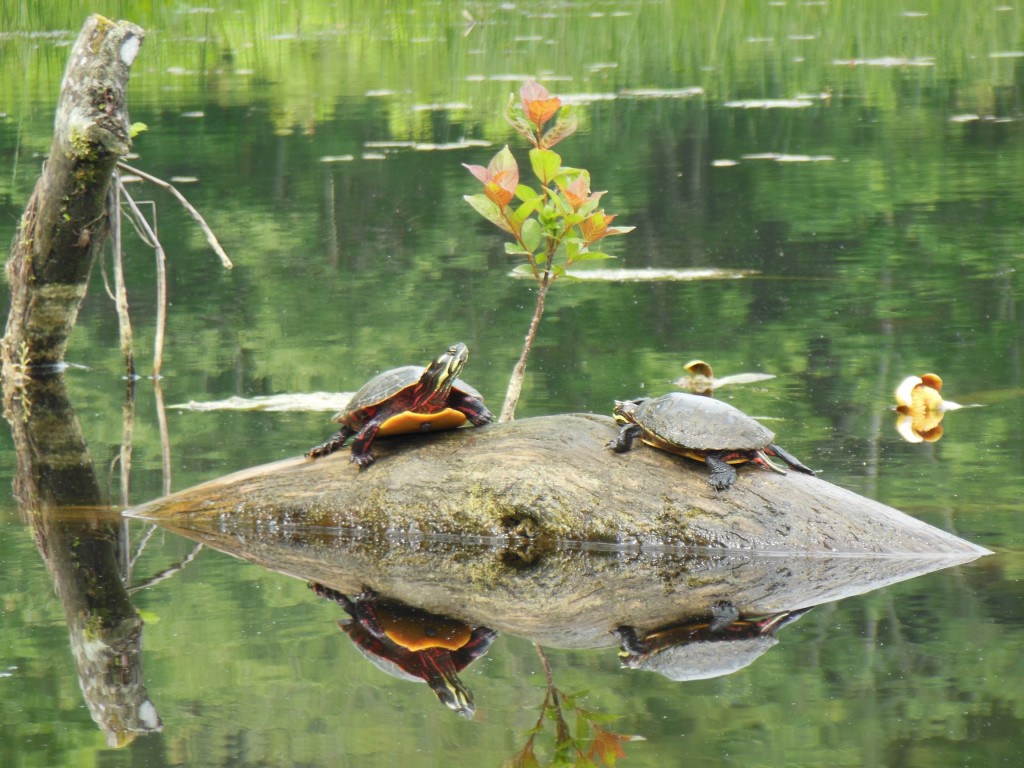 “Come out of your shell Shorty! We have work to do.” 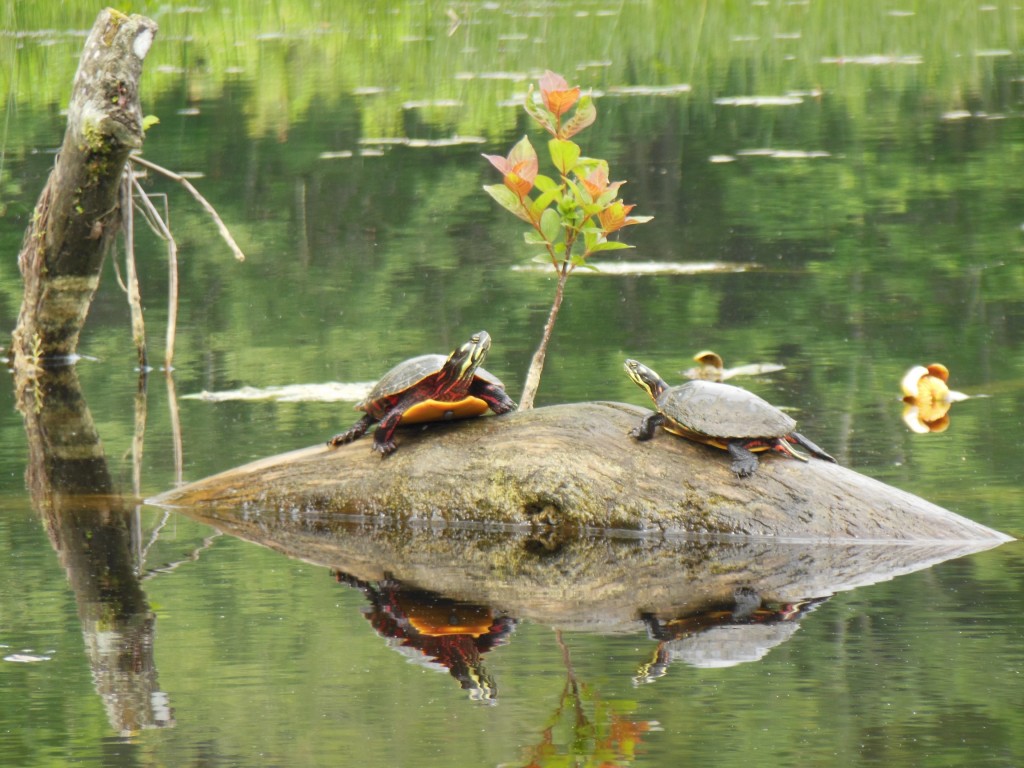 “What’s the plan, Sam?”
“There’s a plump caterpillar in that little plant. It’s your turn to climb up there, Shorty.” 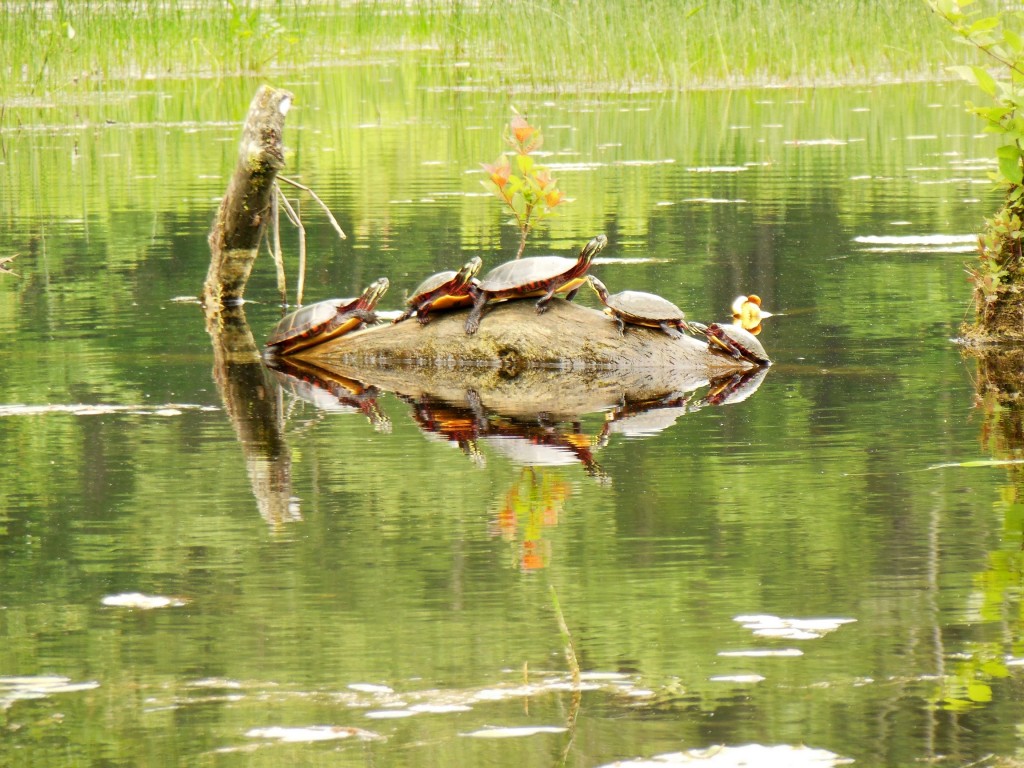 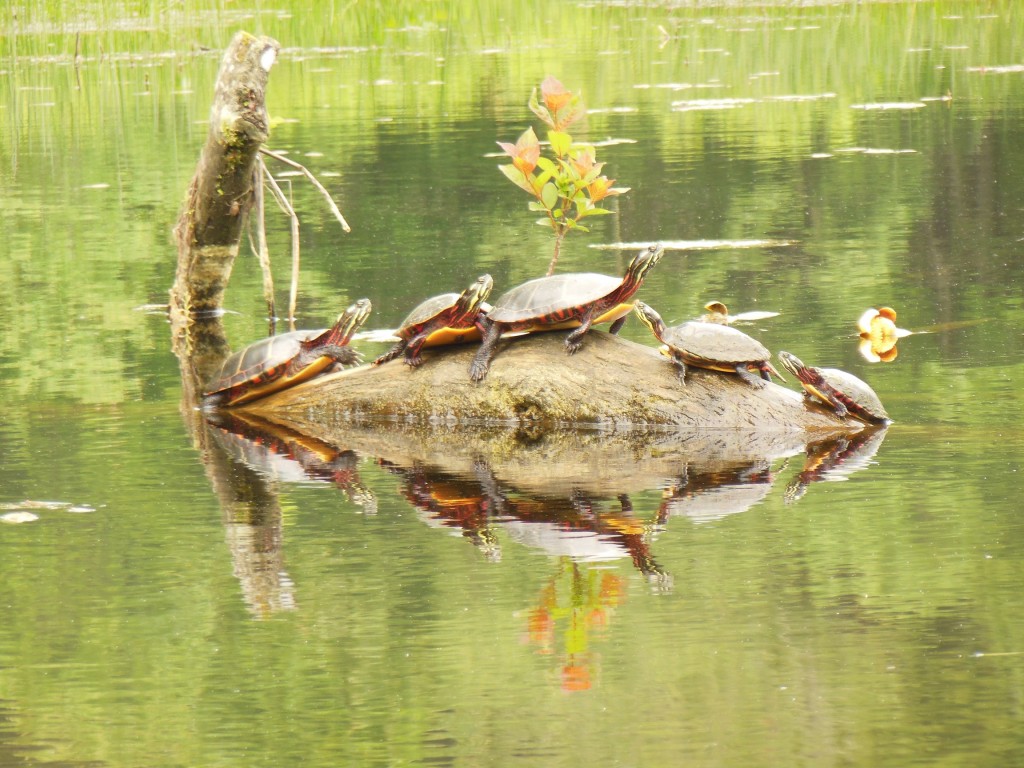 “Everybody look up! I think I hear a low-flying dragonfly coming this way.” 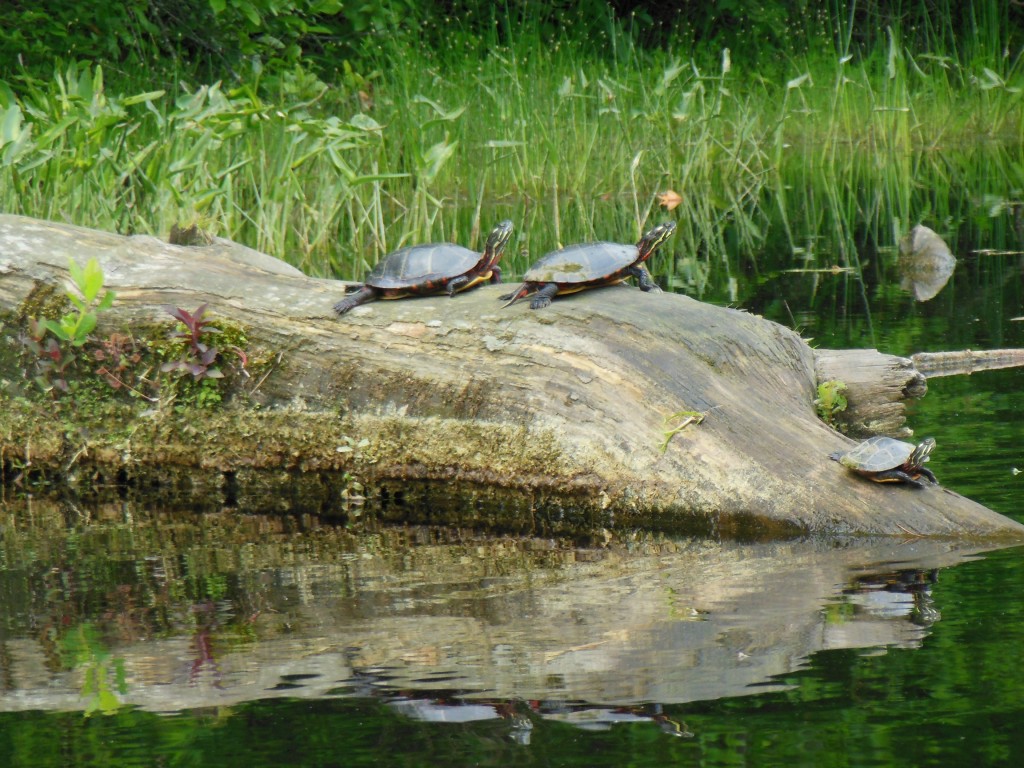 There were a few insects out there too. Fortunately most of them were not interested in me. Maybe it was the insect repellent that I sprayed on myself. Then again they had quite a few other things to eat. The damselflies appeared to be eating small flying insects. The area below where they were eating was often littered with the wings that they first pulled off before eating their prey head first. 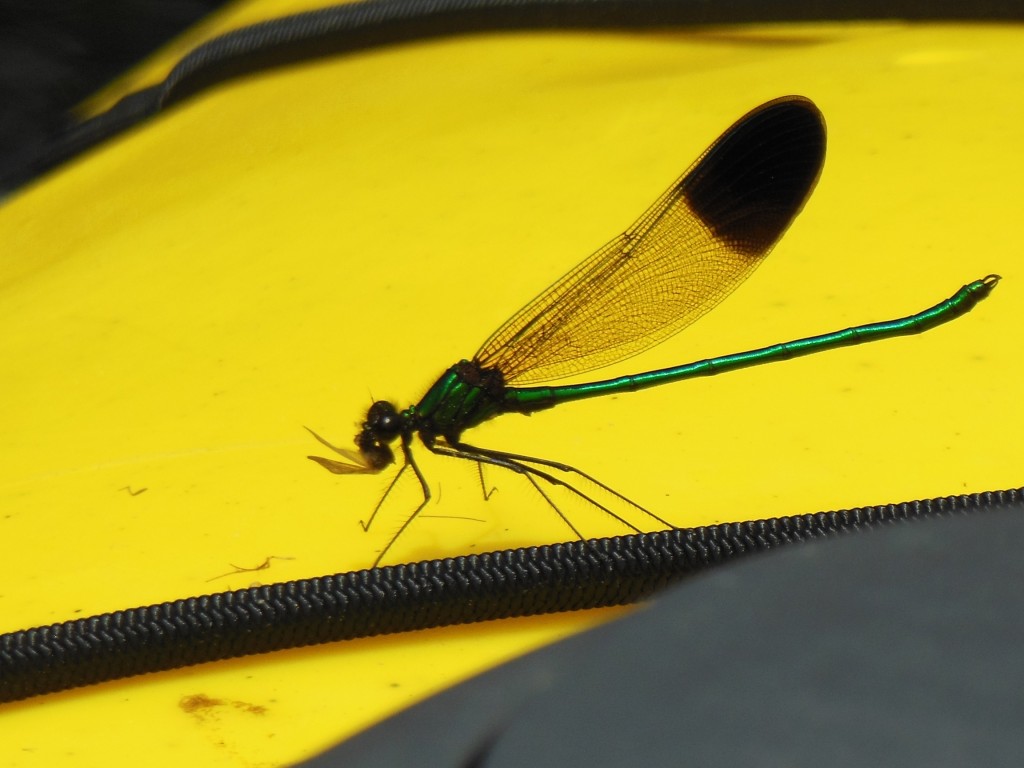 Look closely at the yellow surface of the kayak. Do you see the wings and feet, leftovers of the damselfly lunch? 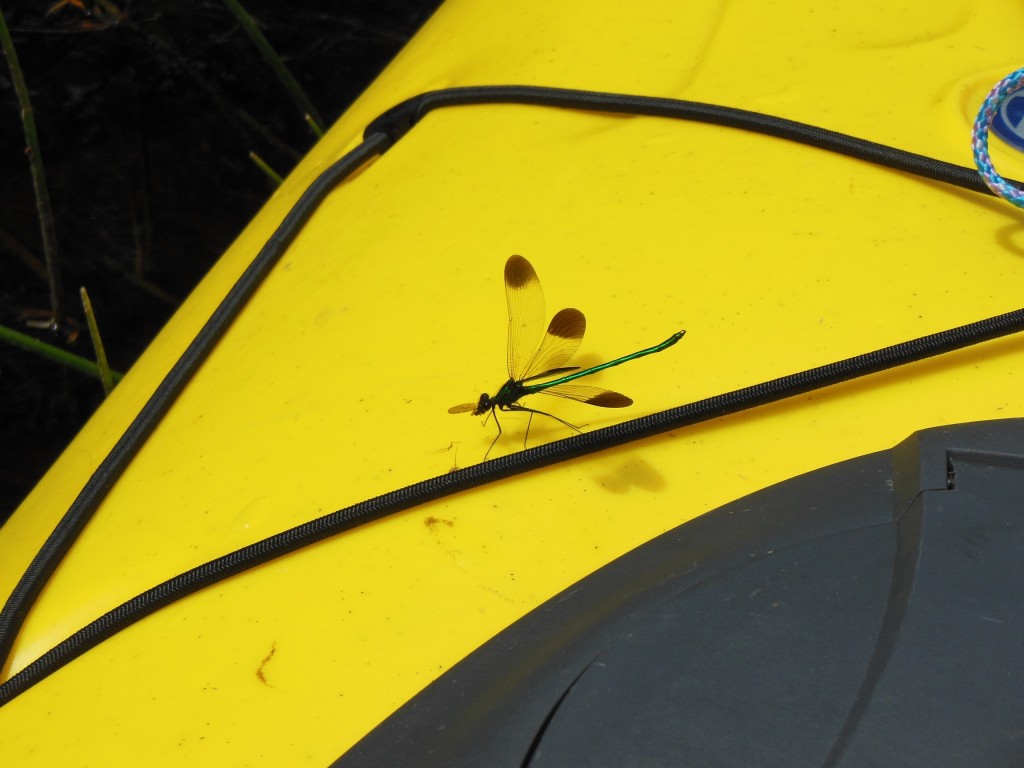 I think this one was ready to take off. He didn’t want to pose any more for the guy who did not know how to focus a camera.

At one point I had to beach the kayak on a small island for a brief rest stop. It seems it was a popular site for a variety of animals. I found some tracks and about a dozen piles of feces. My guess is that raccoons left the mess. What’s your guess? 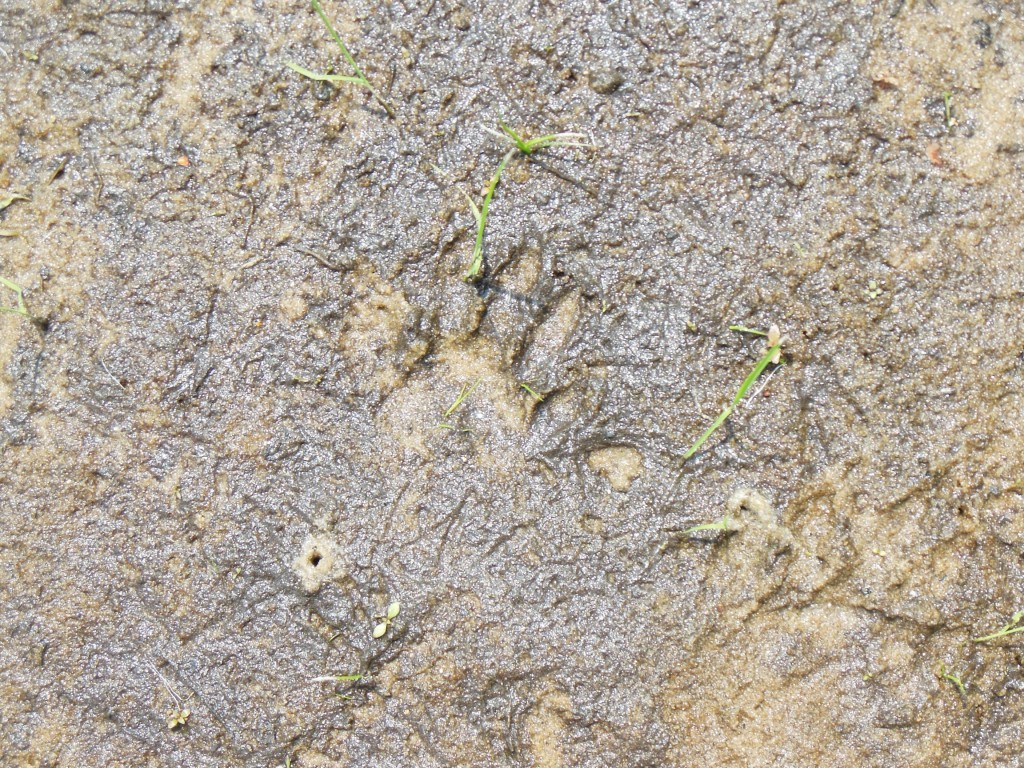 My guess is that a raccoon left this. What do you think? 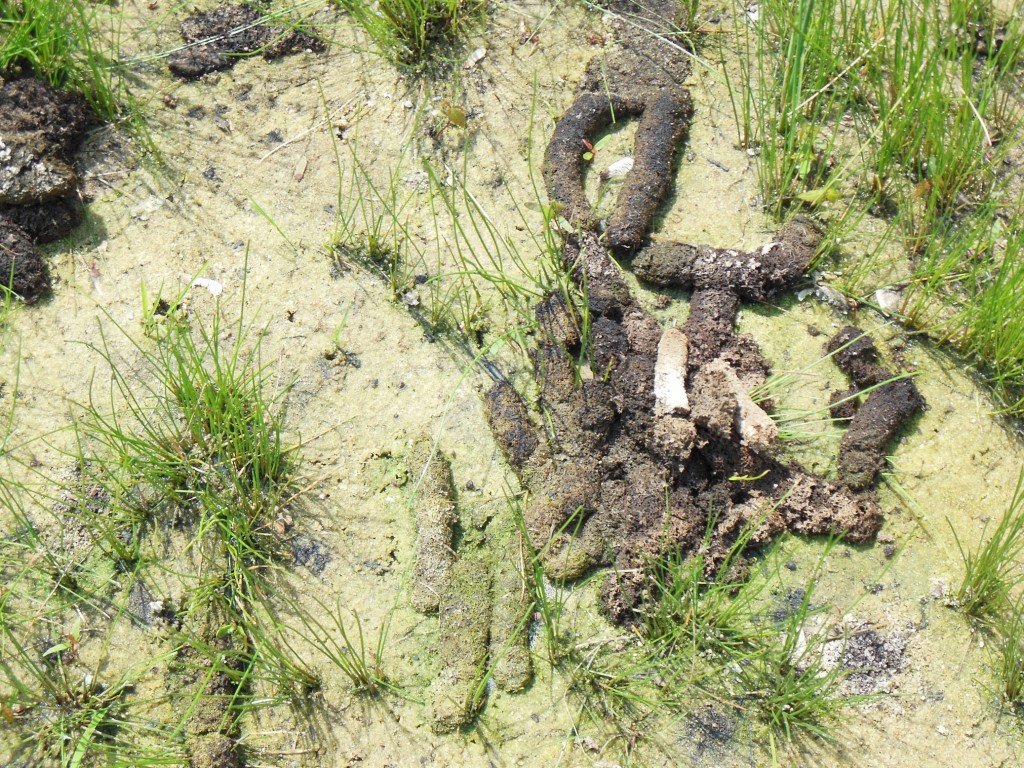 The Wood River supports an amazing abundance of vegetation. Two of the dominant species are arrowhead and rushes. There was also a large crop of lily pads in the sunny sections of the river. 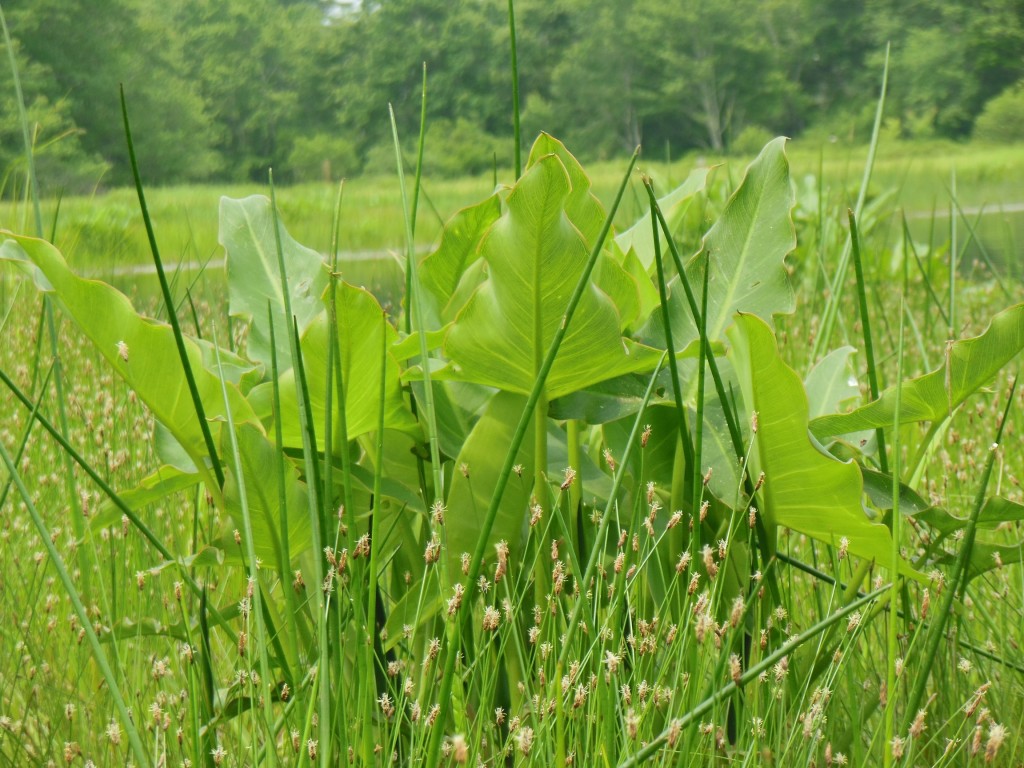 Arrowhead in the background and rushes in the foreground. If you attempt to plow through with a kayak you may end up getting out so as to pull away. 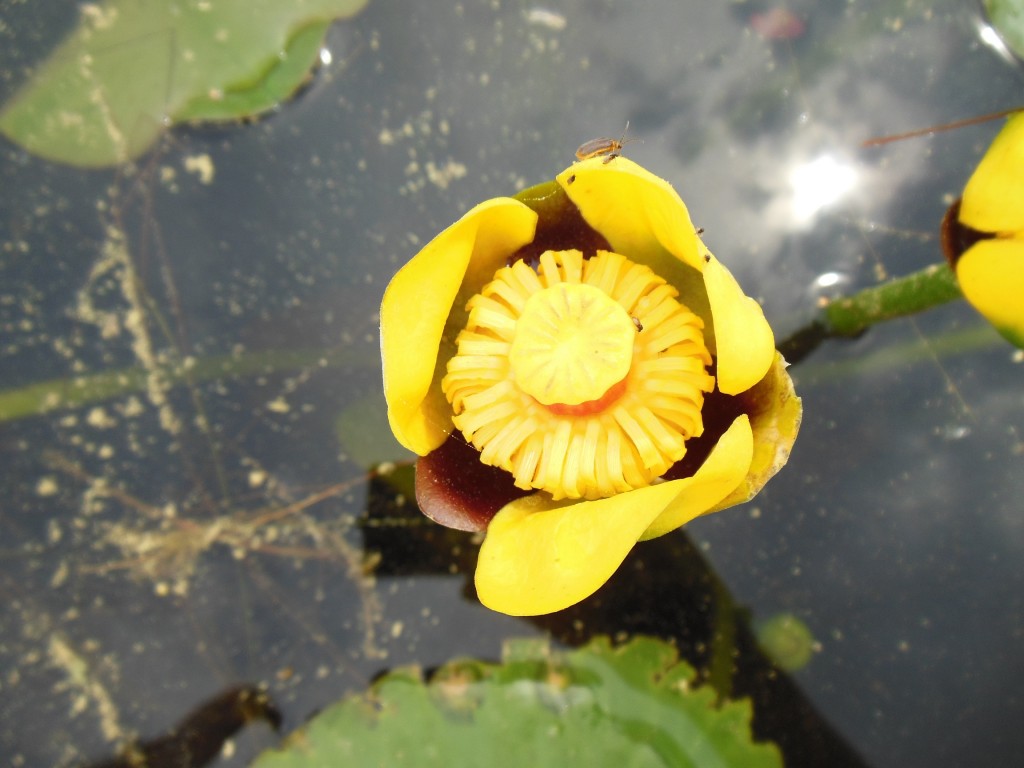 The lily pads are by far the most colorful plant around. The insects love to lick them. 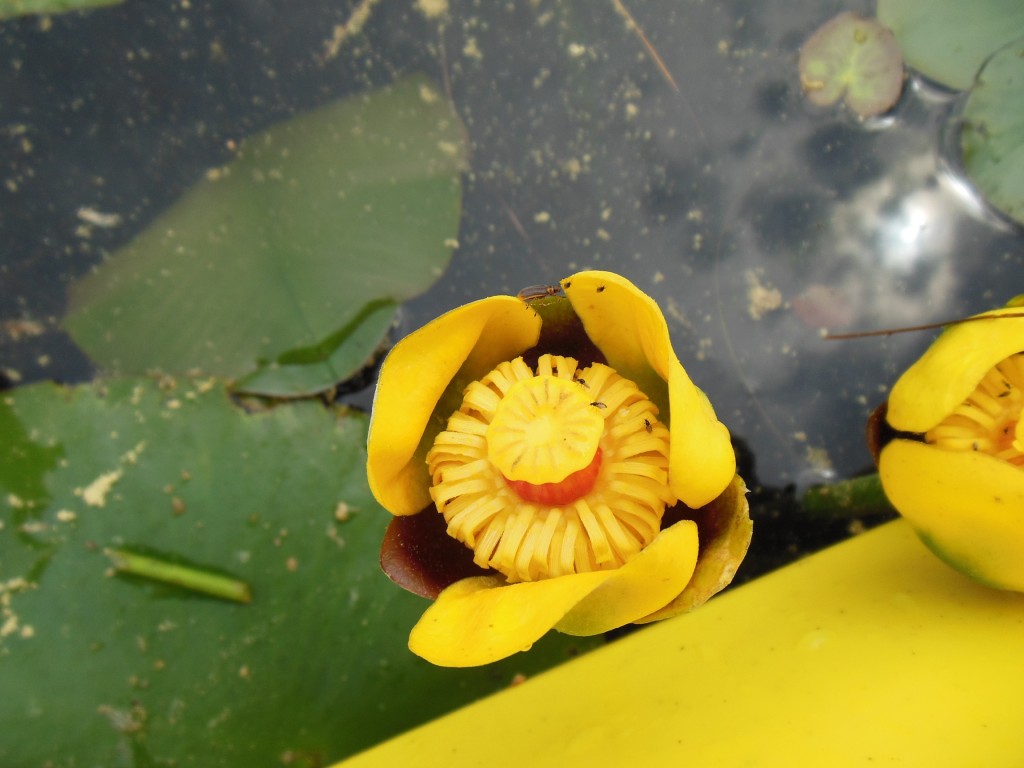 Little bugs have big bugs. Everybody was with the program. 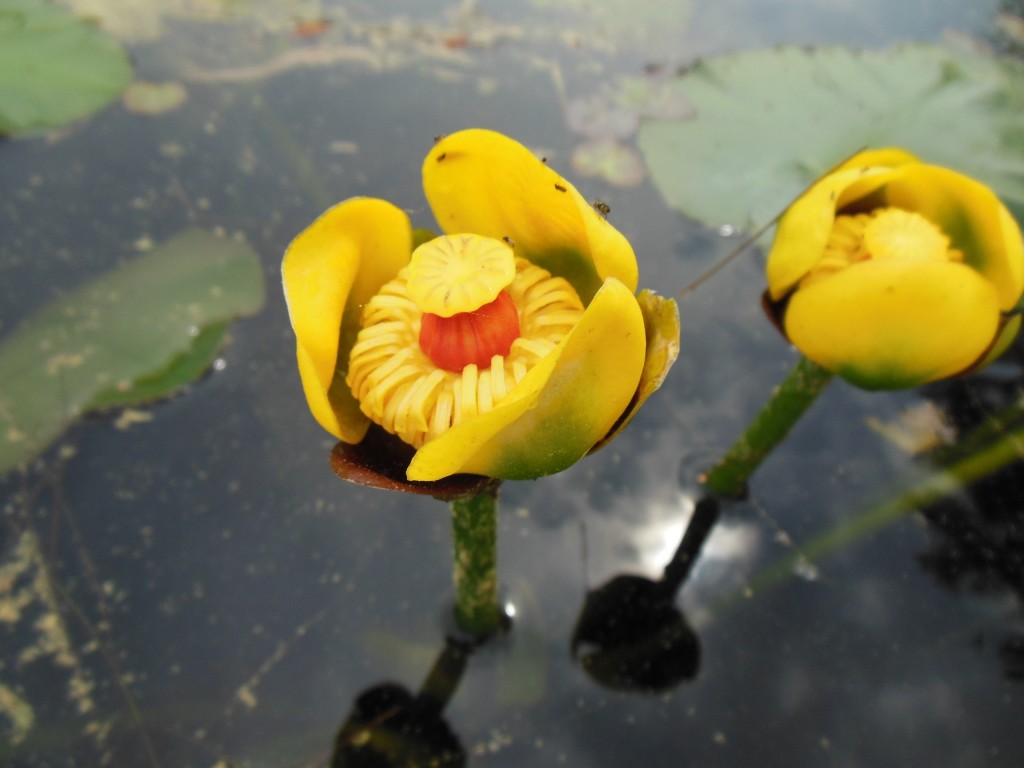 The lower portion of the pistil on this flower is a brilliant red. 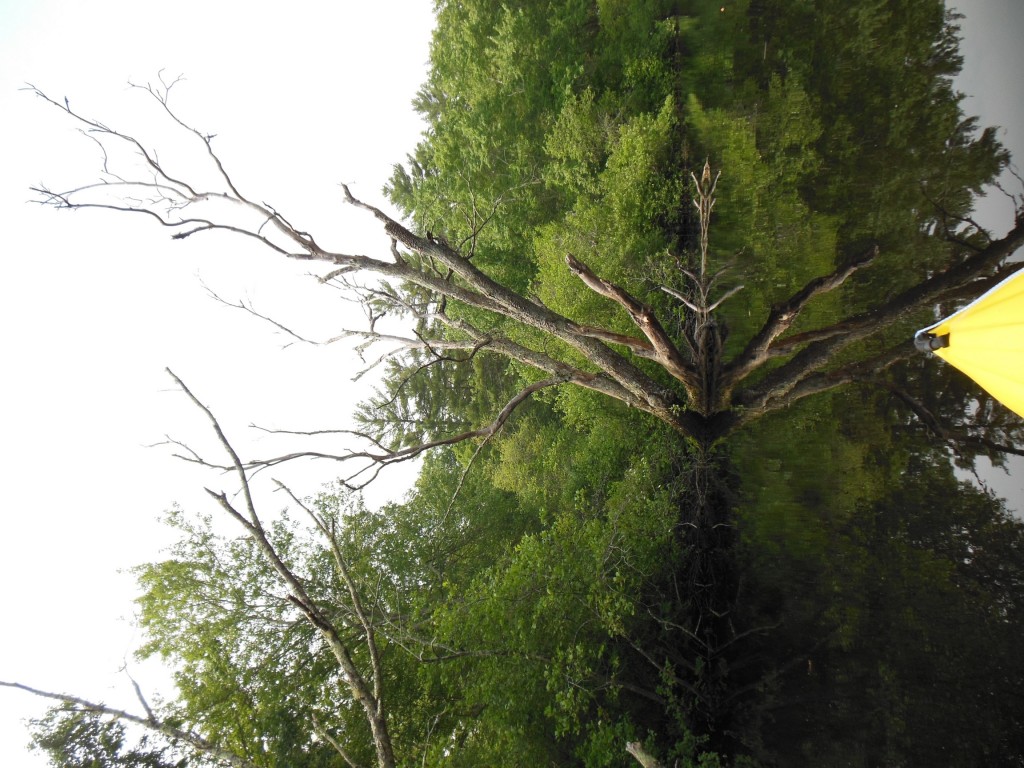 The Enchanted Forest. I decided to leave this photo on its side so you might appreciate the mirror image in the water.

Then there is the elusive Great Blue Heron. I saw several of them, as usual. They also saw me, as usual. They have a habit of flying off long before I can get close enough for an easy photograph. Next time I will have to take my new camera that has manual focus and 40x zoom. Maybe, just maybe, I will then be able to get some decent pictures. 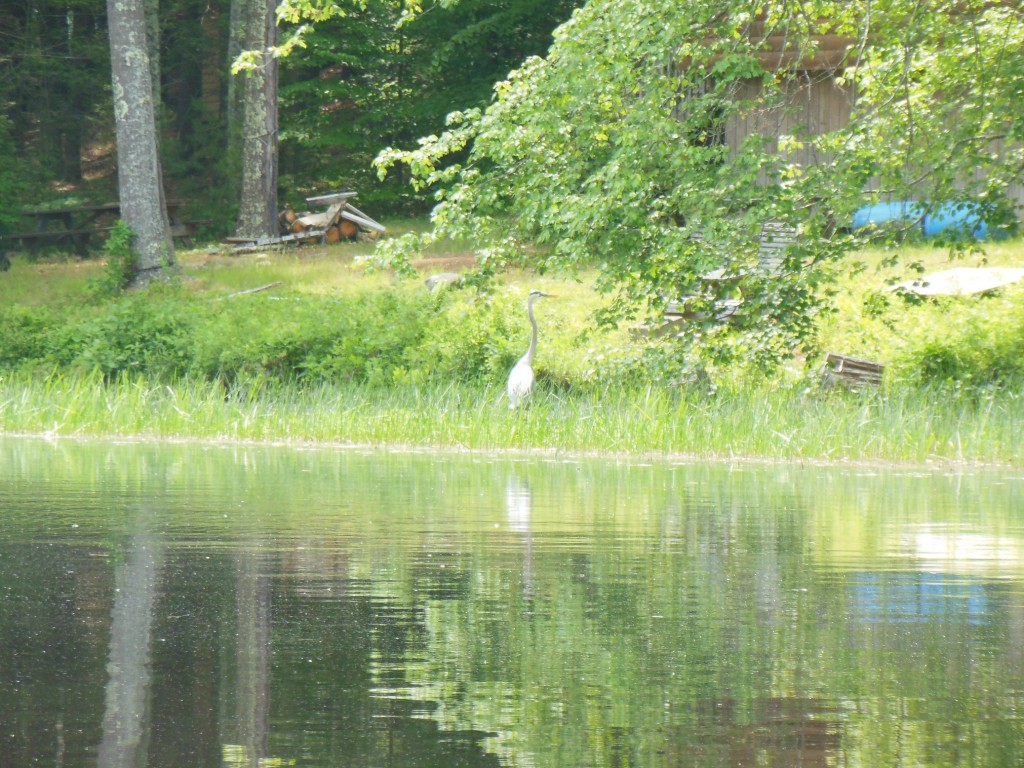 Can you see the bird? It’s the fuzzy thing in the middle. They taunt me. 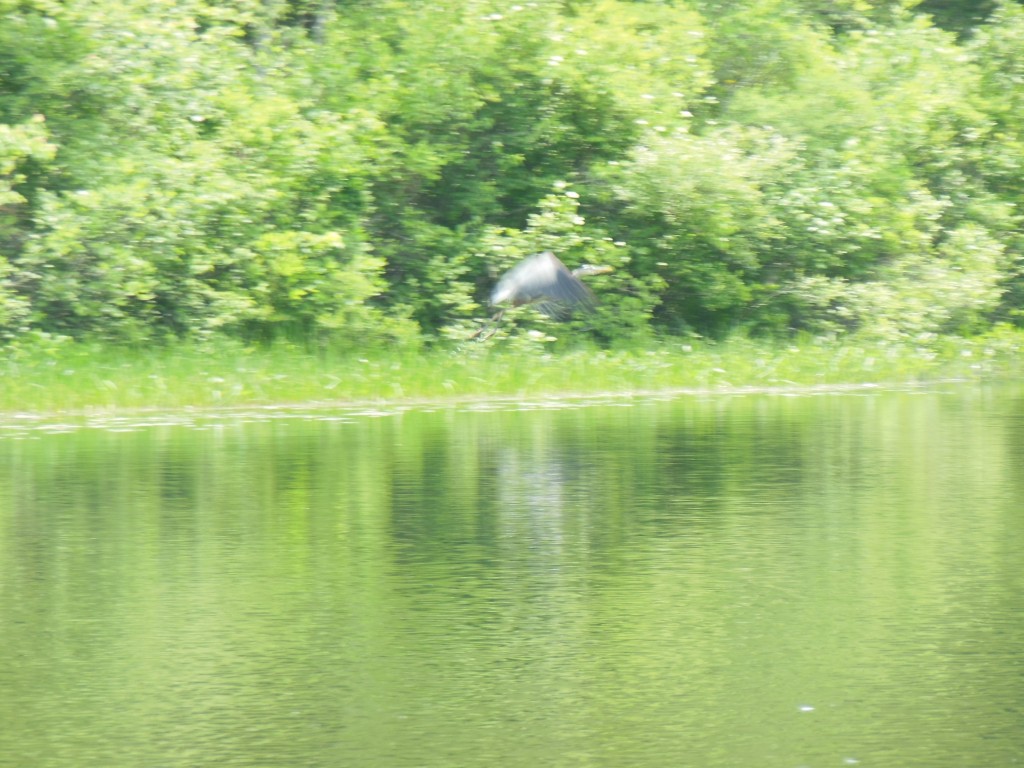 This is what all the herons do when they see me. Next time I will have a camera with which I may freeze the action and keep it in focus. This photography stuff is not easy!

4 Responses to Turtles of the Wood River