Puttering Around with the Buick

Lately I have been spending more time working on the Buick. The car is about to turn 75 years old. It’s about time I paid more attention to it.

I’ve joined the Antique Automobile Club of America and the local affiliate, the Westerly-Pawcatuck Region of the AACA. I bring the car to at least one cruise night per week and even attended one show with it. Next week I will join a caravan of antique cars that will travel from Westerly, RI to the Washington County Fair in Richmond, RI. Our cars will be one of the many attractions at this annual event.

Little fixes are the order of the day for me. I was returning from a Friday night cruise when my neighbor passed by in his red 1932 Ford hot rod. He gave me a toot and a wave. I returned the wave but there was no toot. The horn had suddenly failed again. In the past I did a total rebuild of the interior horn button insulator. It had broken into about 5 separate chunks of plastic. I got them all back together with epoxy, adjusted the horn ring, and made a test. The horn worked. 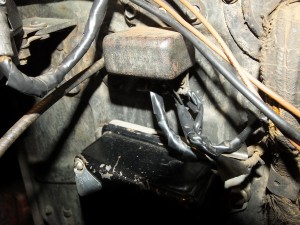 The horn relay is the little box at the top. It will be painted soon. The wiring harness is a mess as you can see.

What could be the problem now? After a little poking around I decided that the root cause might well be the horn relay. I took the relay apart and measured all clearances and cleaned all contacts. I also firmed up one of the three wires (the S or switch wire) that was badly frayed. Now I have a well-functioning horn.

I’m still trying to remove the hood vent so I can replace its gasket. I just get tired and discouraged when lying upside down under the dash with my legs  over the back of the front seat. There is only so much pain you can take at 65 years old. I’ll get back to that one. Then there are the inoperable door jamb light switches. I inspected them and found that they are not original but newer switches that have been soldered in place. They don’t fit correctly, have come loose, and don’t work. I am still tracing the circuit for the interior and back end of the car. When I have this done I will place an order for the required parts.

One other small item that has been pestering me is the sun visors. They needed to be tightened. Also each one has a small vinyl finger grip that had come loose on one side. The stitching came loose and so the grip material just dangled. I decided to fix this with fabric glue. It worked well. You would have to look real close to notice that there are no threads holding it together. 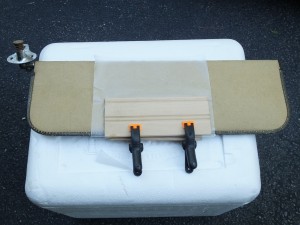 The finger hold on the visor is being glued down in this picture. Fabric glue works well. 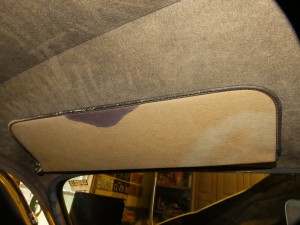 This sun visor has been repaired. The little brown flap in the middle came loose and unattached from the visor. I used fabric glue to set it right.

Then there are the instruments. Most of them don’t work and the wiring is in really bad shape. All of the cotton braid coverings are frayed and faded.

Hopefully I can remove just this instrument panel so I can replace it with a better one I have. I also need to refresh the wiring behind it. Not all the gauges work.

Short circuits abound. Sensors no longer sense. I have to figure out how to remove the instrument panel without taking the entire dash out. If I can do that I may be encouraged to purchase a new wiring harness. The neat thing is that the harnesses are made at Narragansett Reproductions in Richmond, RI adjacent to my hometown of Hopkinton. Narragansett Reproductions is just minutes down the road and they have everything I need. The price is fair but I am not going to make a purchase until I am sure that I will follow through with the installation. (see above discussion).

I did some experimentation with hubcaps. The Buick hubcaps for 1941 have ‘BUICK’ stamped across them. Each letter is filled in with black paint. Most of my black paint is missing. I masked off the letters on one hubcap and managed to do a decent job of spraying the letters. I also experimented on a 1953 Buick hubcap. My son gave me a full set. They are nicely chromed. Originally they also had black, red, and blue paint on them. This particular hubcap was found only on the Special with the straight eight, the very last car to have that engine. All other models had the new V8. 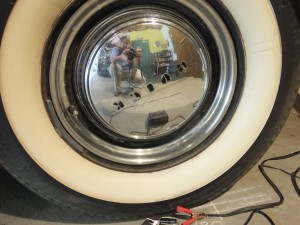 This is how most of my hubcaps appear. The black paint that fills in the letters of ‘BUICK’ is partly missing. 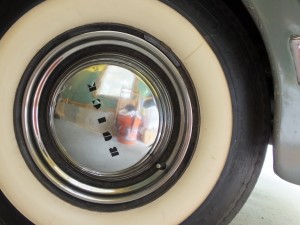 This hubcap has been repainted. It’s not a perfect job but I will get better, I hope. 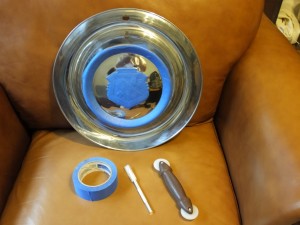 This is a wheel cover from a 1953 Buick. This style was used only on Buick Specials that had the old straight eight rather than the new V8 that all the other models had. The cover was originally black, red, and blue. Here it is partly masked for painting the black. 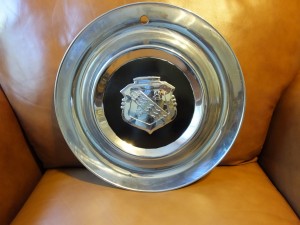 The black area is painted and I now have to do the red and blue. The outline is not as smooth as I would like. Next time I plan to draw arcs on the masking tape before cutting it. I will also use a full can of spray paint, not one that is on its last leg.

Then there is the trunk. I have been working on that for a while. I was able to purchase several missing items through eBay auctions. These include: spare tire hold-down clamp, spare tire wing nut, and the spare tire wheel cover. The wheel cover is a special one. It does not have BUICK impressed on it. The cover is perfectly smooth. It’s only purpose was to prevent any sharp protrusions from the wheel hub coming into contact with luggage. I restored my cover by sanding it smooth and painting it black. Unfortunately the wheel was missing the little wheel clips that hold the hubcap on. My regular supplier was out of them. There just were not any available. Then I found some similar clips that go to a Volkswagen. They were priced at only $8.00 shipped for a set of 5, just the amount I needed. Rivets were included at no extra cost. The ebay seller told me that they would not work on the Buick. I bought them anyway. Each of the four wheels on my car has three of these clips on them. The wheel that resides in my spare tire well is different. It has five positions for the clips. I attached the clips with nuts and bolts rather than rivets. I then bent them a bit to increase the clearance between the wheel and the spring portion of the clips so they would have the exact contours as the ones on my other wheels. When I tried to pop on the wheel cover it would not stay in place; although, it did seem to be attaching at one of the clips. I removed all of the clips and bent each one again so that they had outlines that approximated the one clip that was holding. The clips were then put back on the wheel and to my surprise the wheel cover fit very nicely. Now that was fun! (Note: I can’t guarantee they will work on your car. I just used them on the spare and am not sure how well they might hold on a moving wheel.) 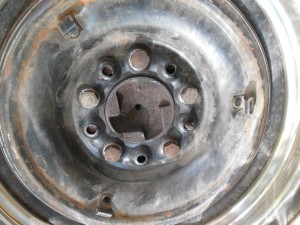 This is one of the four wheels on the Buick. I believe this 3-clip style to be correct for 1941. 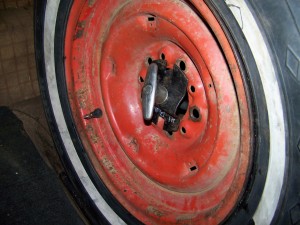 A closeup of the spare before attaching the hubcap clips. Note the black clamp and the large wing nut, both eBay finds. 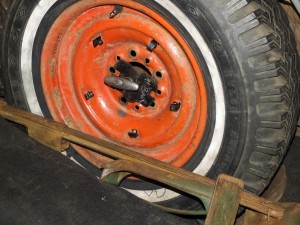 This is the spare I found in my trunk. I am sure it will fit but it does not appear to be a 1941 wheel. Notice the 5 new hubcap clips I have attached. I used screws rather than rivets. 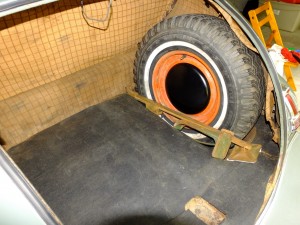 The trunk looks a bit better with the painted smooth hubcap over the wheel. I need to replace the wheel with a correct one or at least paint it the proper color. Notice how much original green remains on the jack. 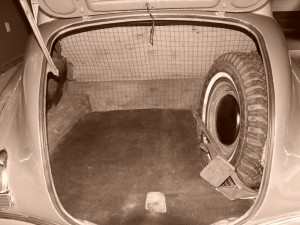 At this point I was just messing with the camera and decided to go sepia. 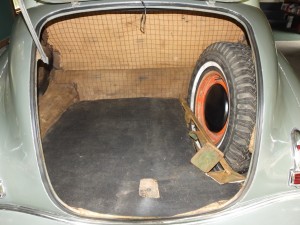 That checkerboard material should also cover the left wall and the floor. What you see is worn but original.

I got a bit carried away while taking some photos of the trunk area. I was trying to test out various features of my camera, a Fuji HS50EXR. I do not like this camera. It is just too difficult to get good photos. If anyone has a suggested replacement I am all ears. I need something that has a high zoom ratio (50x or more) and a tremendous number of automatic modes that cover every possibility. I’m tired of trying to figure out how this thing works. It’s time for something that is very automatic and which has a large sensor.

(Note: clicking on any image will enlarge it in a new window. Click ‘BACK’ to return.)

2 Responses to Puttering Around with the Buick