The Buick Goes to a Wedding 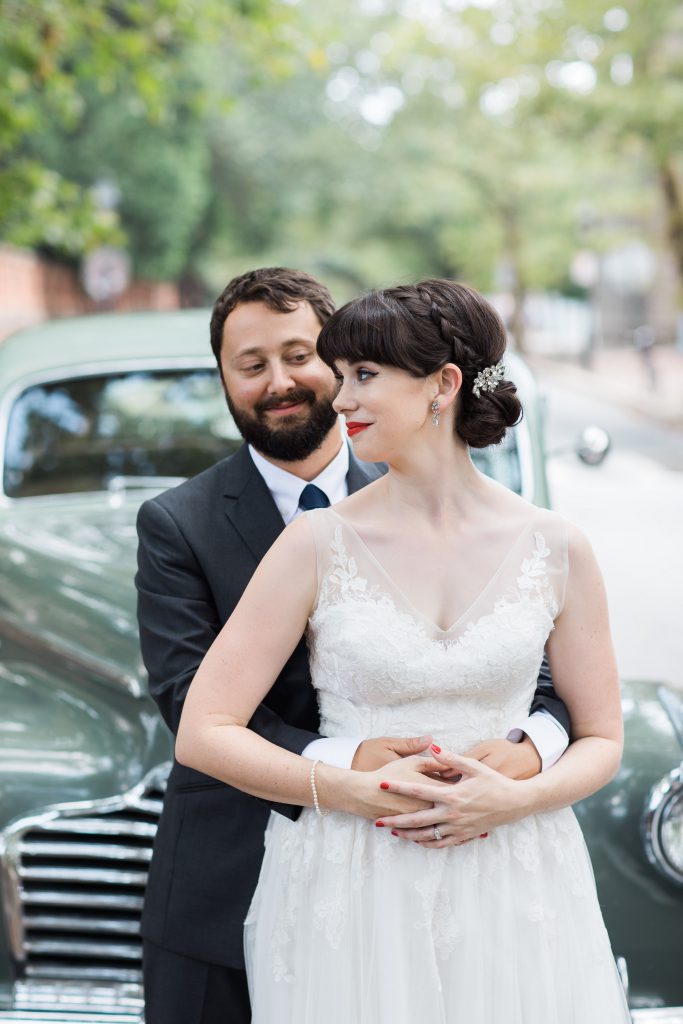 What does one do with a 76-year-old car? I drive mine to various cruises and car shows. The condition of my 1941 Buick is such that it will never win any awards but it does attract an abundance of curious people. I think they like to see something that comes from a time before they were born, a relic that represents the style and flavor of the 1940’s. If you are into film noir, this is the car to be seen in. The body of the Buick has curves and details that originated with designers who were playing to an audience that admired the art deco style. They were not building to government safety standards or fuel efficiency as is presently done.

Probably the ultimate compliment to an old car enthusiast is when one of his children requests that he use his car to chauffeur them on their wedding day. This car has been on a program of continual mechanical improvement since I acquired it in 2002. By 2006, when my eldest daughter married, it was still prone to frequent breakdowns; although, I had made some safety improvements. She wisely hired a beautiful limousine and had a great time. My second daughter took a different approach; married on an island beach she made her getaway in a dune buggy, appropriate for the location and short travel time.

My son, our youngest, and his fiancé have been part of a new trend among those who have entered professional disciplines in the last decade or so. They have a special admiration for the simpler times of their grandparents and parents. She collects antique cameras, vinyl LP’s, and vintage clothing. He is a devotee of old 8mm movie cameras, antique printing presses and ornate typescript reminiscent of the gilded age. And so I was both flattered and anxious when my son’s fiancé asked me the question during a May breakfast at The Classic Cafe in Providence’s Federal Hill. Would I be so kind as to drive them on their wedding day? I of course accepted immediately. I had about 4 months to work out any remaining bugs.

It just so happened that this summer I used the car more than ever before. I attended car club events (WPRAACA), cruises, and car shows. As a result the car developed problems that I never saw coming. First there was the perpetually leaking brake master cylinder. I had to do something about that. I was at the point where I was checking the fluid (and often adding fluid) almost every time I took the car out. With the help of friends Tom Link and Bob DeGoursery we removed the brake cylinder. I sent it off to Apple Hydraulics and had them do a full rebuild including resleeving. The next problem to crop up was the loss of first and second gears due to a linkage problem that The Transmission Shop corrected. Smitty’s in Coventry installed a new muffler to replace the one that had a hole in it. And finally my long ago rebuilt fuel pump began to leak. Off to My Classic Car Trader in NJ it went.

After I replaced the fuel pump I thought I was in the free and clear. I decided to do a test run of the bridal route with my son as navigator. The only date we could get together was about 3 weeks before the big event. Everything went off without a hitch until we arrived at the 50 mile mark, just minutes from our two final destinations. We were in heavy traffic all day and had just stopped at a light on Metacom Avenue in Bristol. The car stalled. All my attempts to restart it failed. I quit while the battery was still strong and my son and I pushed the car through the intersection and into the 3-foot wide breakdown lane. I removed the air cleaner and opened the top butterfly valve. I also removed the sight screw in the front carburetor and poked the float. It was fully up and gas leaked out. Now it was just time to wait. A police officer offered to help if we were not able to get it going and I thanked him. I confidently predicted that it would be rolling in a short while. A nice local resident also stopped by. He offered to return with some tools if we were still stranded after he finished his run to a local store. We just sat on the grass along the sidewalk and waited for the car to cool down. It looked like vapor lock. After 40 minutes I cranked the engine once more and it started! Off we went to the next location, Colt State Park. I did not turn the engine off. Finally we moved on to the last stop, Herreschoff Marine Museum, the planned site of the September wedding. I thought we were in the free and clear when while backing up in the museum parking lot I heard a great bang and shudder from below the car. I had not hit anything. It was just a huge backfire. At this point we suspended our planned lunch at a local pub. I took my son back to my daughter’s house in Cranston where his car was parked and I went home. The 110 mile round trip was over. My confidence in the car was shattered.

What to do? I consulted with the experts, Tom Link and Bob DeGoursey the Gasslight Repairs guys. They suggested I use a little heat shielding of the fuel line and then go for it. I put in the shielding using shield tape and some real nice high temp tubing that Bob gave me. I also installed a new oil-cooled ignition coil (Don Oster and John Leite suggested this) and replaced the radiator cap that was not locking properly. I was still having misgivings. At this time I also discovered that my lower control arms were shot and were the likely cause of my steering difficulties. No time to replace them! I went so far as to research if any classic cars were available for hire. Don Oster offered to help with his car; but, I knew I had to do this alone. At one point I called my son and told him that we might have to use plan B, me driving my son’s new Subaru. He was OK with that but I could tell from his voice that he was disappointed. When my son later informed me that his friend Nick, a fellow RISD graduate, would be willing to follow us in case of a breakdown I decided to take Tom’s advice and ‘just do it’.  During the weeks previous to the wedding I was a nervous wreck. I won’t go into all the details but I had firmly decided that if I ever made a successful trip to the wedding in the Buick Roadmaster I was going to celebrate with more than two Narragansett beers!

Well, the big day came and the car performed flawlessly. The only small problem was when they asked me to back it onto the cobblestone wharf for a photo shoot. It was dark by now. Recall that a 4,500 pound  ’41 Buick has no power steering. My son’s new father-in-law, Nick, volunteered to ride shotgun. I got it backed onto the wharf but the last few yards of positioning the car were rough. Those cobblestones just grabbed the tires and the normally hard steering now felt like I was trying to drag a bag of rocks through 6 inch deep mud. Nick reached over and added his strength to the wheel and together we positioned it just where the photographer Matt wanted it. Later that night I parked the Buick next to the museum and my wife drove us home in her VW Beetle (she is the designated driver). We picked up the car the next day. It was trailing spent cat food cans and covered with colored paper streamers. The windows were soaped with ‘just married’ and drawings of cats (my new daughter-in-law loves cats). 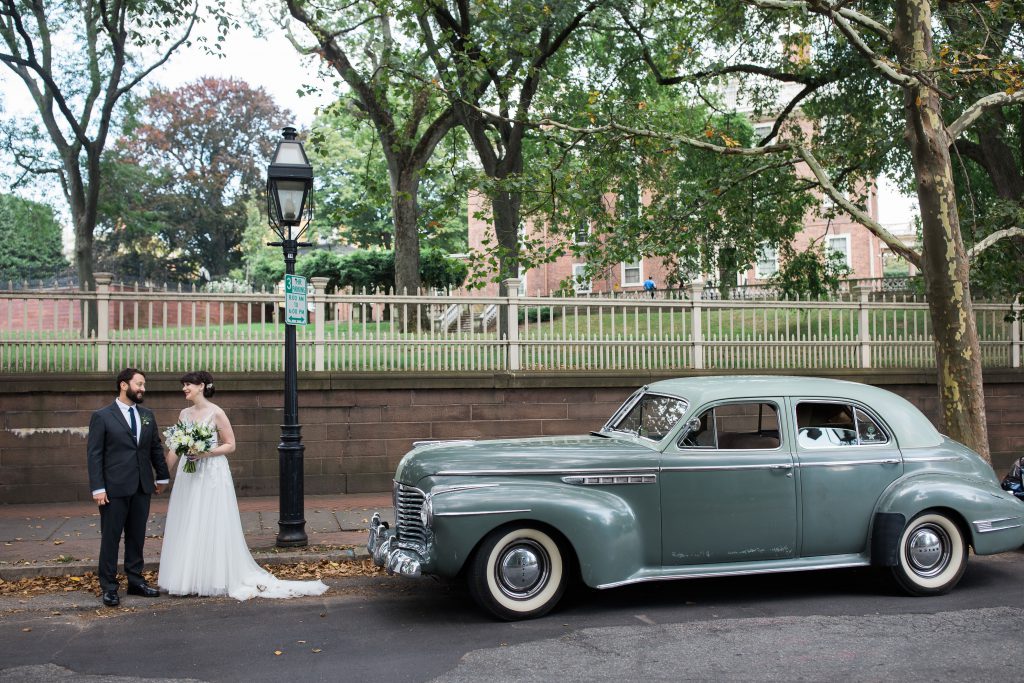 Benefit Street in Providence. Try driving a Buick Roadmaster in that neighborhood!

It was a great wedding in so many ways but my son and daughter-in-law made it extra special by trusting me to deliver them safely and stylishly in the old Buick. I am forever grateful to them and my WPRAACA buddies who provided encouragement and technical assistance. I am also much relieved that the wedding of my son Alex and his new bride Liz is the last one where I will be required to do anything more stressful than have another beer. 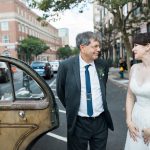 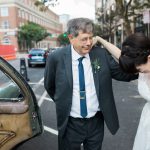 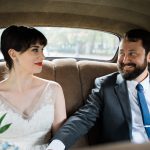 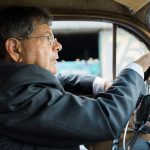 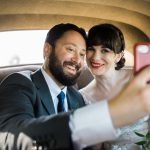 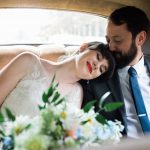 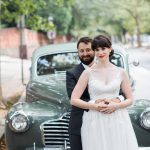 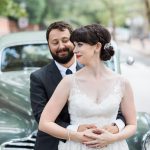 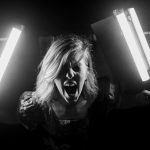 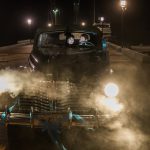 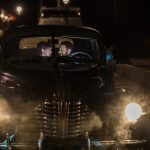 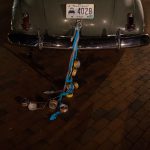 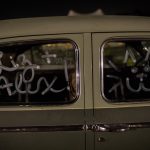 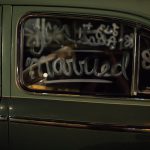 (Note: All photographs are courtesy of Matt Ferrara Photography; click on images for enlarged view)

8 Responses to The Buick Goes to a Wedding