One Thing Leads To Another

I have trouble starting a new project. The problem is that whenever I start something new there are already 4 or 5 other projects left behind in an unfinished state. I have a tendency to begin things and then move on. I always intend to come back to complete a job but it just takes so long to return. Something that should take 2 weeks ends up stretching out to 2 years before it is finished.

That’s the way it has always been with the Buick. A lot has been accomplished; but, most of it is unseen improvements. Brakes, pumps, suspension, fuel delivery; they have all been improved or upgraded. Now I am looking at gauges that don’t work and wiring that is in such bad shape that on a couple of occasions I have experienced shorts and burnt wires. I have decided to upgrade the wiring, dashboard appearance, and whatever else crops up. 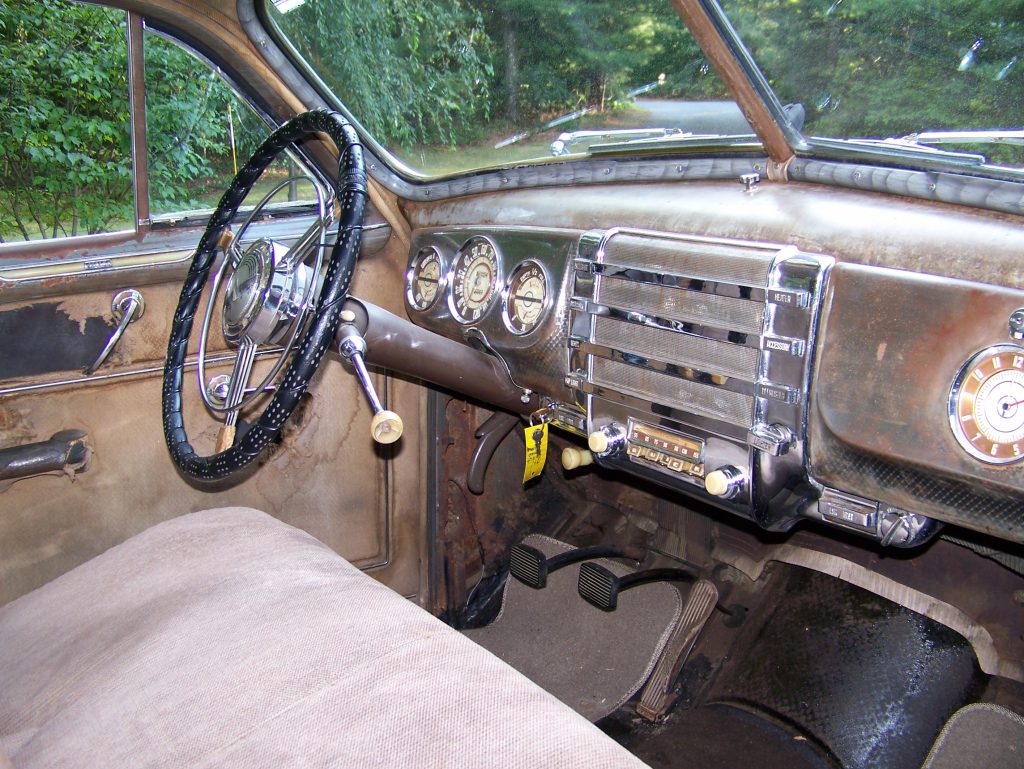 I began a couple of years ago by replacing the glove box door with a much nicer one that I bought many years ago. That replacement door came along with an instrument panel that was also much nicer than the one in my car. I never installed it. The reason of course is the difficulty of removing the old panel. It is held on by 5 long studs and nuts. The instruments are attached to the gauge panel by an additional 8 nuts, speedometer cable, oil pressure sensor cable, and temperature sensor cable. Then there are all the wires going to the gauges; wires that often have their original cloth insulation frayed or missing entirely.

I finally decided to continue the project because so many things were going wrong. The ammeter does not work. A close inspection reveals that the plastic panel it is mounted to is warped to the point that it prevents needle movement. The water temperature gauge does nothing and so I have no chance of being warned of an overheating problem. The sensor is broken off at the block and part of it remains in the block. The speedometer works OK up to about 55 mph. Then it begins to bounce all over the place. According to my speedometer I have cruised down route 95 at over 100 mph (not so). Likewise the odometer has been stuck on 80,241 miles since I bought the car 16 years ago and the trip odometer has also been stuck and does nothing. 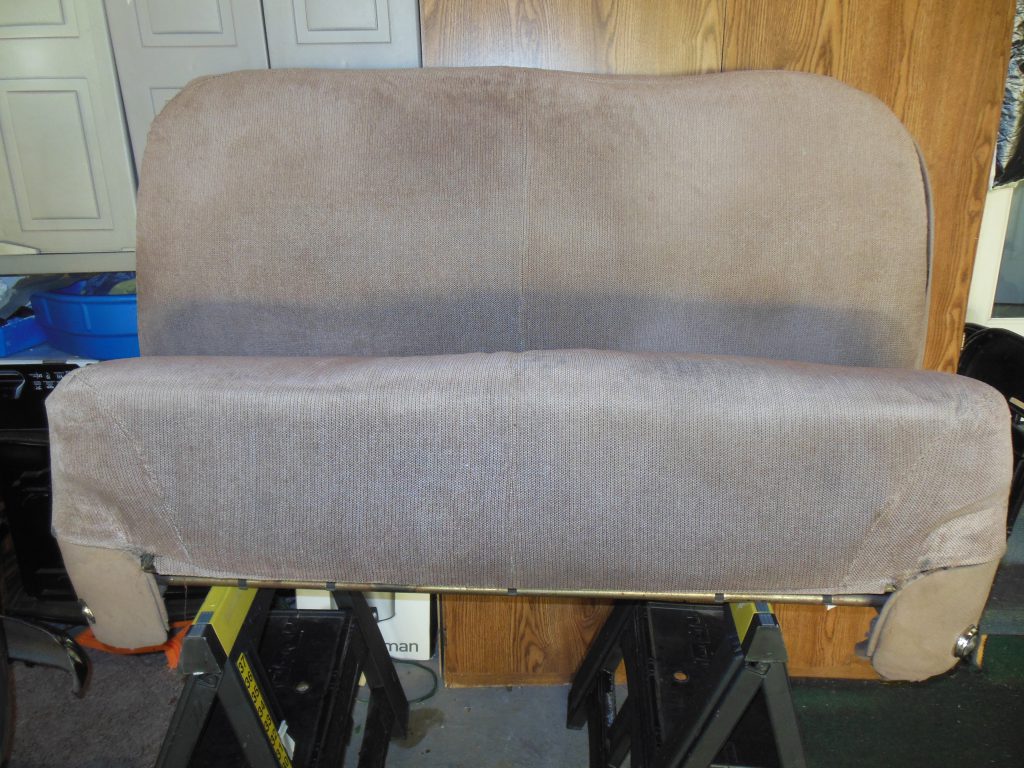 Step one was removing the front seat. Otherwise there is no way to contort my old body so I can fit under the dash and still walk away.

The radio and an ashtray came out first. The radio went to my shop bench to await restoration. It works, but poorly. I then removed the starter switch, which was in my way. Buicks don’t have a starter switch. Mine does because someone bypassed the vacuum switch on the carburetor. I have since put in a new carburetor with a good throttle/vacuum switch. I will have to connect it now. The handle that operates the fresh air vent was not in my way but now I could clearly see the linkage that I need to remove in order to install a new gasket under the vent. I was only able to do that job after consulting the AACA pre-war Buick forum and asking for help. I also had to remove the knurled knob that controlled the trip odometer. It would not come off even after I removed its center screw and hex nut. Back to the AACA board where I got advice to hold the shaft tight with pliers and pull real hard. That did it. Not only did the knob pop off but now the trip odometer worked! I promptly reset it to 000000 miles. 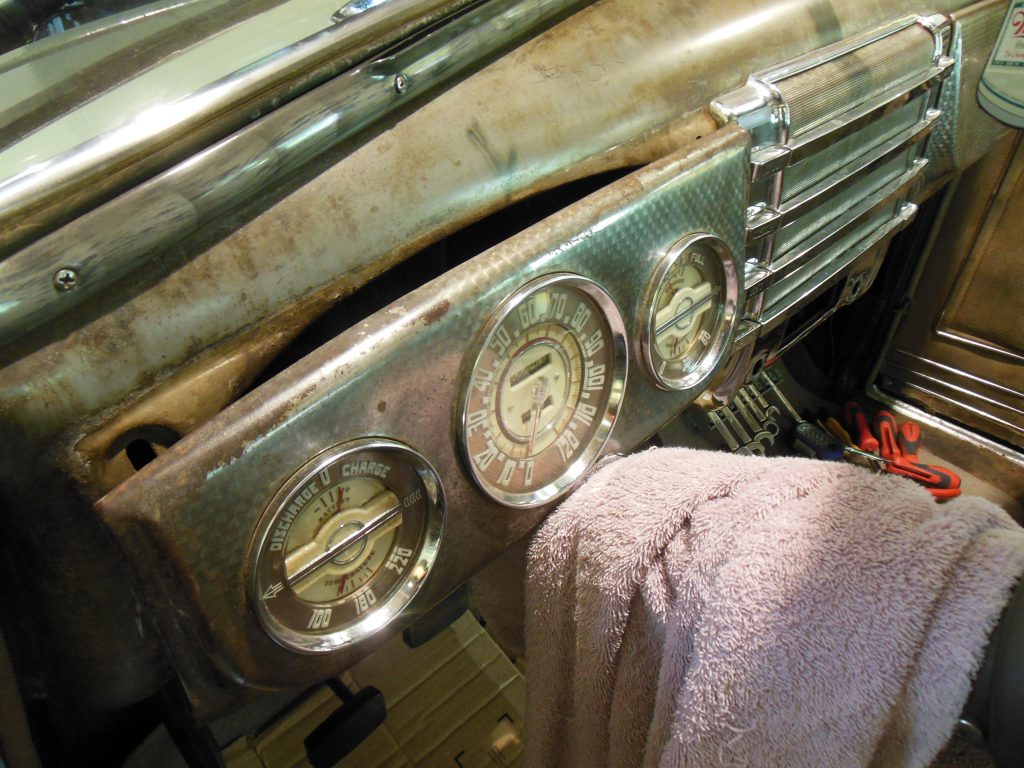 The five screws that hold the panel to the dash have been removed and I can pull the panel away about 1-1/2”. Now the fasteners holding the instruments have to be removed.

Finally on to the studs that hold the instrument panel on. They are long so I had to invest in some nut drivers that had hollow shafts that would allow them to get to the nut. There is almost no room under that dash to get at the studs, especially from straight on. It took me days to free it. I used a combination of open and closed wrenches and socket wrench with and without swivel end. Sometimes I just used the socket by hand since there was no room for a wrench. Each removed nut was then attached to the corresponding stud on a spare instrument panel so I could keep track of my progress. When I hit the number five I attempted to pry away the panel. It would not budge! Finally I looked under the dash again and noticed that there was one more nut where I had supposedly already removed one. How did that get there? Well, I removed that last nut and then pried away the panel using screwdrivers and a specialized seam opening tool that I used to use on Macintosh computers. Meanwhile I replaced the fresh air vent gasket (remember that). I’m not too happy with that result. I don’t get along well with adhesives.

Finally the instruments were all revealed! Now it is on to stage II, replacing the faulty gauges, sensors, and speedometer cable. If I get carried away I will probably buy a new wiring harness and install that. I also plan to practice wood graining, steering wheel restoration, and other stuff. One thing leads to another. I think I see a visit from the Gaslight Boys in my future.

(To be continued, I hope)

Click on any of the  photos below enlarge them. 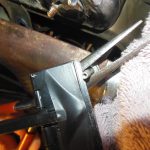 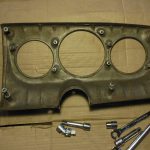 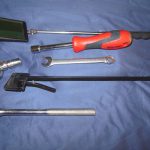 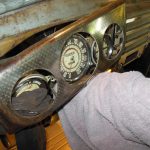 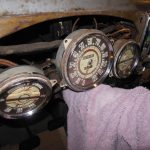 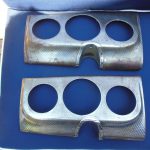