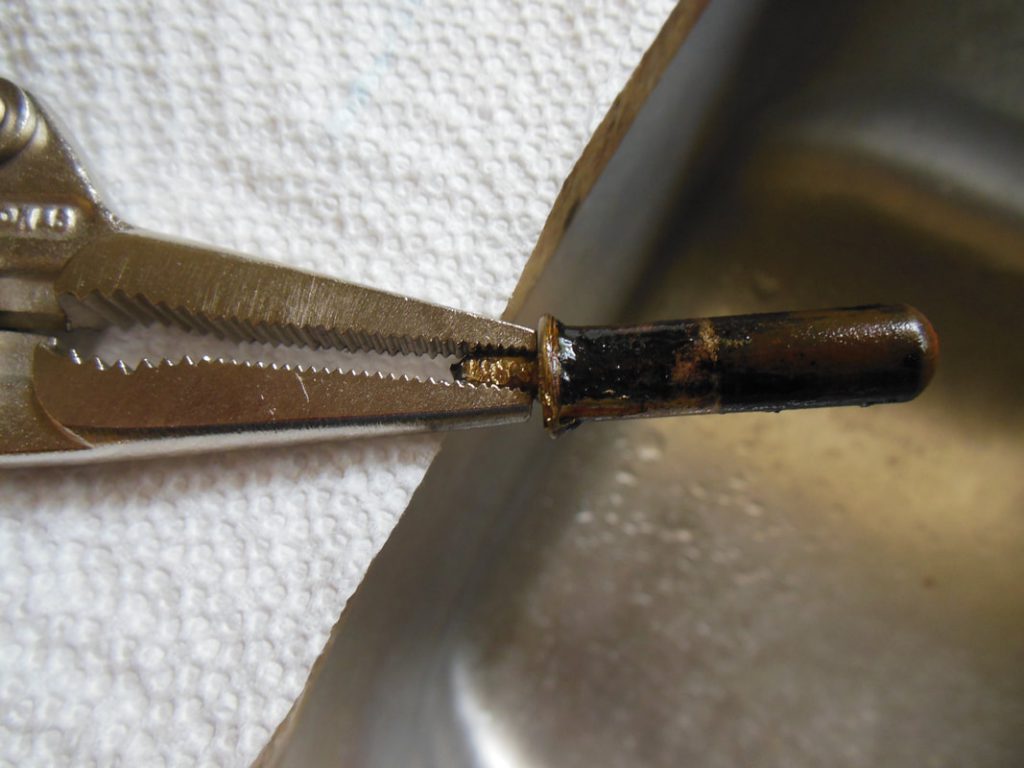 If you read part I of this story you would know that my overall goal is to make my Buick safer and better looking. It is getting there, slowly. I will try to make this episode a bit shorter than usual because as one friend has said “You use too many words”. He is right.
​
After removing the instrument panel I just let all the gauges suspend by their very substantial wires while I addressed various issues. The ammeter was removed with the intention of replacing it with a NOS unit that came with the car (box and all). I found that the needle on the old meter was fused to the meter face where the face had warped. Rather than mess with repairing that I decided to just put in the new one. While removing the gauges I had the battery disconnected. Each time I wanted to test something I reconnected the battery for the duration of the test only. I installed the new ammeter, again attached the battery ground lead, and tested the ammeter. It worked great! When I started the car the meter moved to the plus side indicating that it was charging. Then it slowly returned to center position as the battery was fully charged. After the test I turned off the engine and began to remove the temperature gauge. Unfortunately I forgot to disconnect the battery. As soon as I moved the instrument panel sparks flew all over the place from the area of the ammeter. I was startled so badly that my hands immediately flew upward and in the process I knocked the needle right off the new ammeter. After hours of trying to solder or glue the needle back on I gave up. I got out the old meter and pried its needle away from the face so it could move freely and then reinstalled it. At least it looked better. To my surprise I found that the old meter now worked showing a little charging on startup and quickly going back to center. 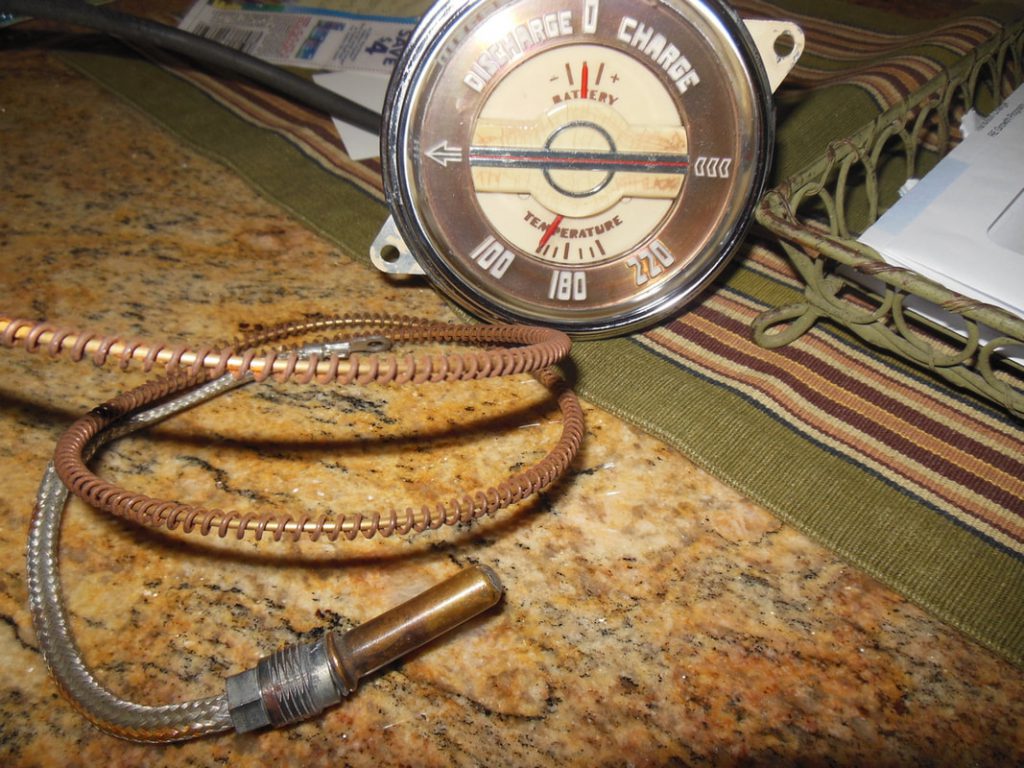 New water temperature gauge, shielded capillary tube, and sensor that screws into the block. The old sensor (the brass end that looks like a cartridge shell) is at this point still stuck in the block.

Next was the water temperature meter. I removed the old meter and cable and easily installed the new one in the dash. After routing the shielded cable through the firewall I needed to next install the sensor end in the block. Unfortunately the old sensor was stuck. Just a short stem was sticking out from the center of it and no amount of tugging would make it budge. What to do? I bathed the old sensor in PB Blaster every day for over a week and each day I tugged on the stem with some long-nosed locking pliers. It did not move. Next I drilled holes near the center of the sensor and squirted more Blaster in. I even put a large nail through one hole and tried to pry the piece out. Nothing. So, I continued to spray and tug twice a day. Then one day I noticed that the stem was now slightly above the hole the sensor was inside. This made me tug even more and finally the thing let loose. I took photographs. I looked at it, walked away, and then came back and looked again to make sure that it really had come loose. Then I installed the new sensor, connected the battery, and started the car. It worked perfectly. The temperature slowly rose and then leveled off at exactly 180 degrees and held steady. How many ways can you spell the word HAPPY? The lead photograph above shows the piece that was extracted.

The speedometer was next. The old cable unscrewed easily from behind the speedometer head. Unfortunately this was not the case for the end attached to the transmission. I could not even see it, never mind remove it. As I slid under the left side of the car to get at the transmission I quickly became wedged in place before getting close to my goal. I had to jack up the car and crawl under again. I used 3 heavy duty stands and blocks under the front left wheel. This time I traced the cable with my hand and found it attached high up on the left side. 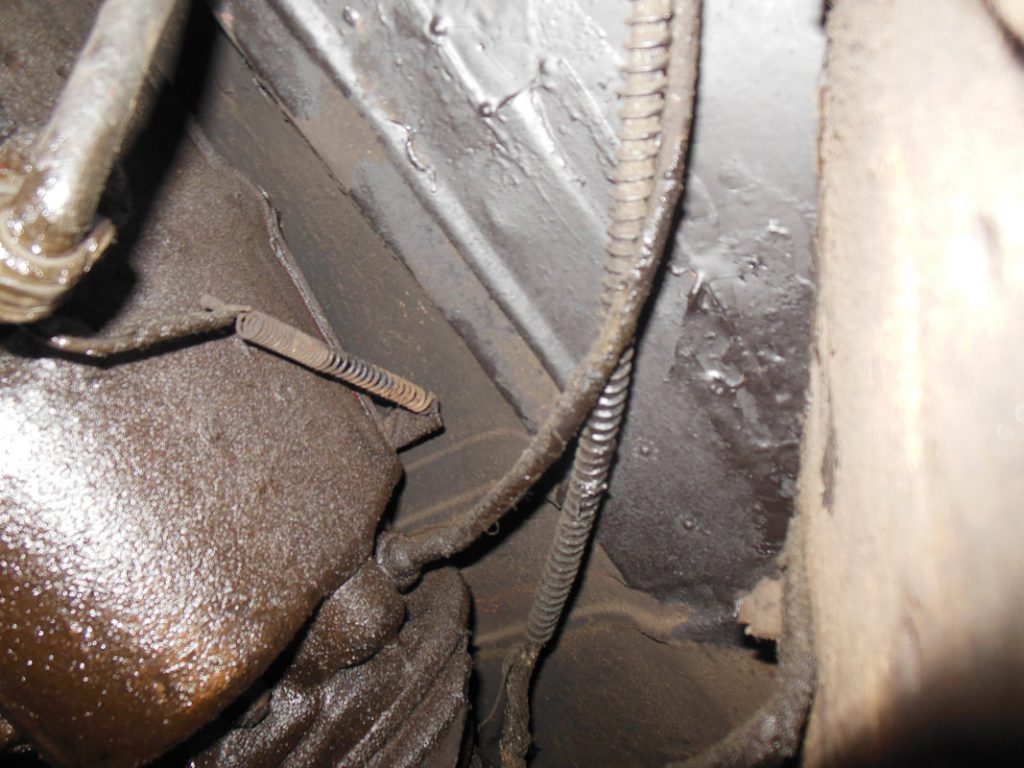 The cable directly below the spring is the speedometer cable. You can just about see the fitting that screws into the transmission. The larger cable is the parking brake cable. This was a very tight squeeze under a jacked up car.

Slight pressure from a slip wrench loosened it enough so that I could unscrew it the rest of the way by hand. I lubricated the new cable with white grease and screwed in the transmission end. Although it did not work well at first (I routed it at a slight angle since the replacement was a bit too long) it now works much better after placing it in the original path that avoids any turns. After about a week of driving I can now get the car up to about 60 mph without any wild gyrations of the speedometer needle. Unfortunately the odometer still does not work. I may get a new speedometer head from a friend and thus solve that problem.

I put the instrument panel back in place. Rather than putting the nuts back on the studs of the panel I used small grommets. They hold it pretty good for now and will just pop off when I am ready to continue. Before putting back the radio I installed the fresh air vent and gasket. Unfortunately I made a mess of the gasket. Bob Degoursey helped me remove the old gasket. He properly prepared and glued everything in place and used blue masking tape to hold the vent down while the seal cured. He did a great job! It is so good to have friends who know what they are doing around a car. There are plenty of them in this club! 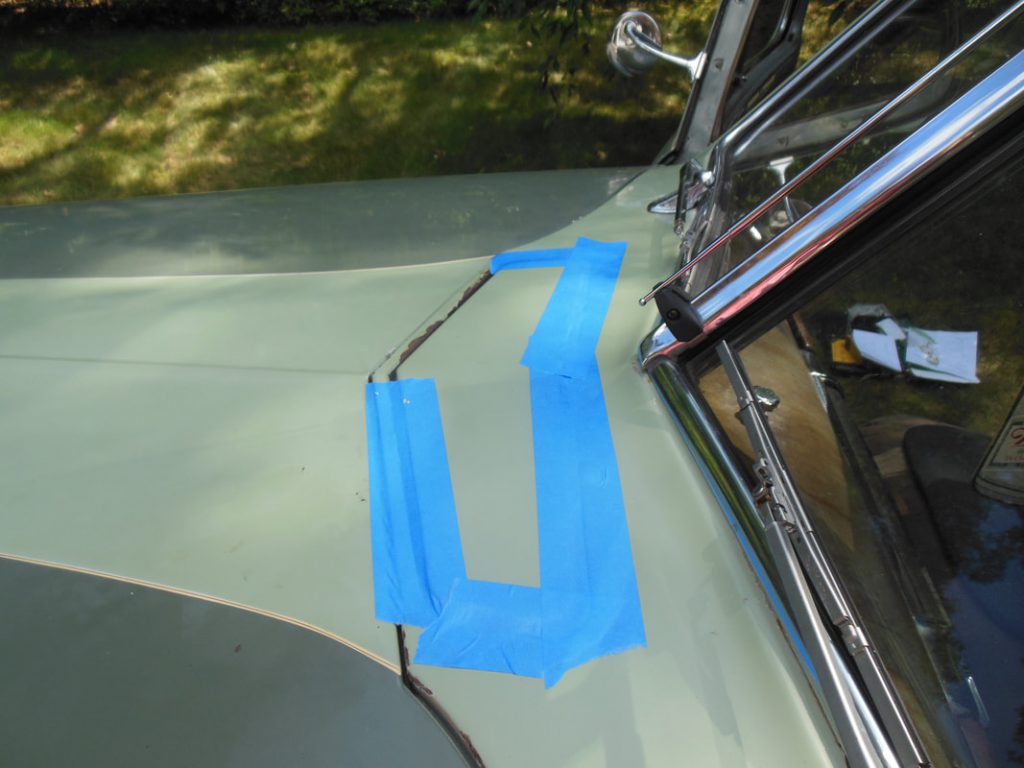 What about the “One Thing Leads To Another” part? Well I broke one pushbutton on the radio while reinstalling it. A complete set of new knobs will cost $100 unless I can find some nice used ones. The heater hose under the dash fell apart when I moved it. I need to order that since it is a specialty item (not at your local NAPA store). Now that the instruments (except the clock) are sorted out I needed a new wiring harness. I ordered the harness from RI Wire and received it in about 3 weeks time. I have not installed it, though. Why? My engine compartment is looking a little messy with all that green paint worn away. The plan is to mask the engine parts and spray paint the firewall and other areas in the engine bay. That means I have to get some paint mixed and put in rattle cans (there is an auto paint shop in Coventry that will do this) and apply it in the springtime when it gets warm again. The usual morning temperature when I started this project was about 75°. Now it is 25° F.

I have labeled the wiring harness and have a good idea where everything goes. Springtime is going to be very busy.

Too many words? Oh well. 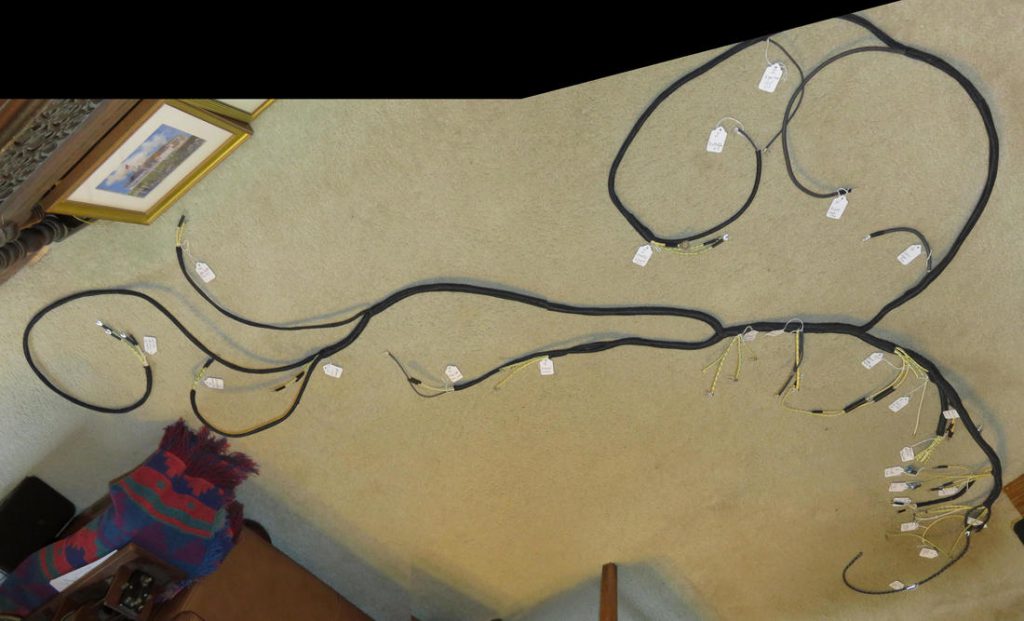 Two photos have been stitched together to show the entire engine/dash instruments/lights harness. I added the paper tags so as to better understand what goes where.

The photos in the gallery seen below provide additional details. Click on a photo to enlarge it. 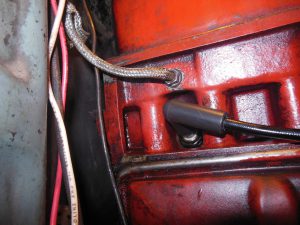 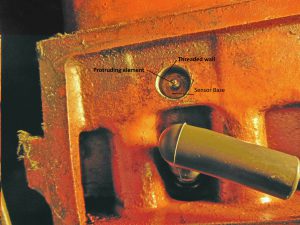 Old temp. sensor broke off during removal. Remnants are deep in threaded hole. 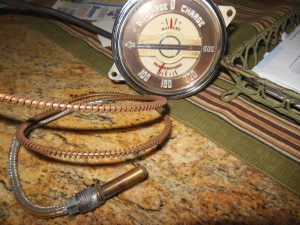 Water temp. cable and sensor have been attached to instrument pod. Note new amp. meter which I later broke the needle off of. 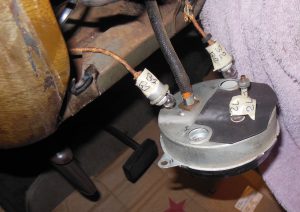 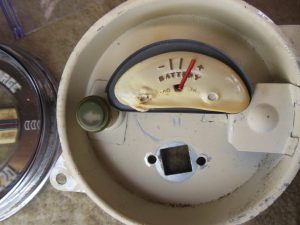 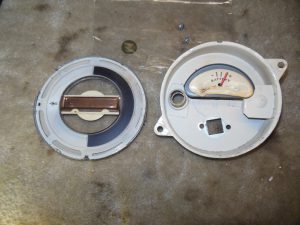 Back side of ammeter pod. 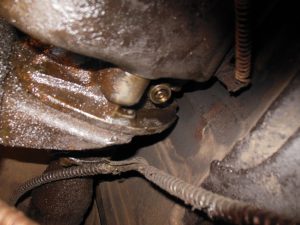 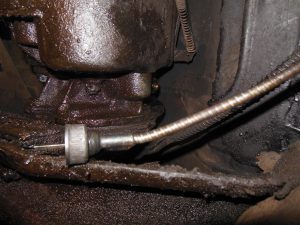 Speedometer cable ready to attach to transmission above. 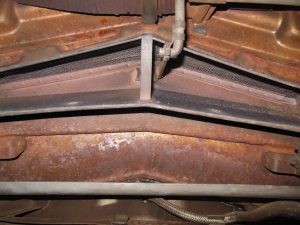 Underside of fresh air vent. Take photos before pulling one of these apart. 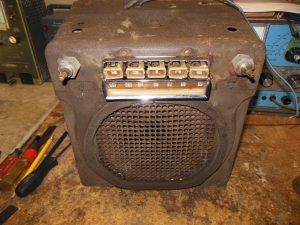 The radio had to be removed for access to instrument panel.