If you have visited this blog in the past you are well aware that I am a dedicated radio collector. A better description might be radio accumulator. A collector is very discriminating. He or she specializes in certain styles or eras. The collector usually only buys items that are in the best possible condition. If something is broken or otherwise not in near perfect condition he repairs and restores it. My collecting interests are all over the place: communication radios, 1920’s  TRF’s, cute little Bakelite tabletops, cathedrals, portables, and incredibly large consoles of all sorts. Although I am getting a bit more selective these days it is due more to a lack of space rather than a maturing of my collecting interest. I haven’t stopped buying radios yet. I just do it less often.

My primary sources for old radios are three:

(1) The Eastern Connecticut Amateur Radio Association (ECARA)  annual flea market held in Dayville, CT,(2) The New England Antique Radio Club (NEARC) annual swap meet, and (rarely) (3) eBay. ECARA has not happened yet this year (9 days to go and counting). eBay is a constant source of temptation. I recently bought a RCA Radiola 16 through eBay. It looks pretty good with all of its globe tubes present but unfortunately only two work. The cabinet will need to be refinished. I have not tested the audio transformers yet. I hope they are good!

I have not been to the NEARC meet for some 5 years or so. It is a long drive (1-3/4 hours) and since my partner in crime, Ken Franklin, moved away I have nobody to share the  ride with. This year I finally decided to attend once more.

he event is held at the Westford Regency Inn in Westford, Massachusetts. There is plenty of parking but you need to get there early if you want to be anywhere near the end of the sprawling complex that houses the swap meet. This year I arrived at exactly 8:00 am just as the doors opened. Stand in line, pay your $10 and put this sticker on your jacket, that’s the drill. If you frequently enter and leave the exhibit room (the size of a basketball court) you will need that sticker or the guards will not let you pass. I anticipated several trips to the truck since the stuff I usually buy is quite heavy and it takes a few trips to get it all loaded. It was not so bad negotiating the aisles between vendor tables at first but things picked up quickly within the first hour. This is a very crowded event! I walk the periphery of the meeting room first and then continue with an aisle by aisle search.

Right off I found a book I was looking for. It is a history of E. H. Scott Radio. Books and other kinds of radio ephemera are a big deal for me. I love looking through the old stuff, especially the brilliant engravings from the 1920’s and earlier. I did not see any old written material that was of interest at this particular flea market; but, I did see several radios. 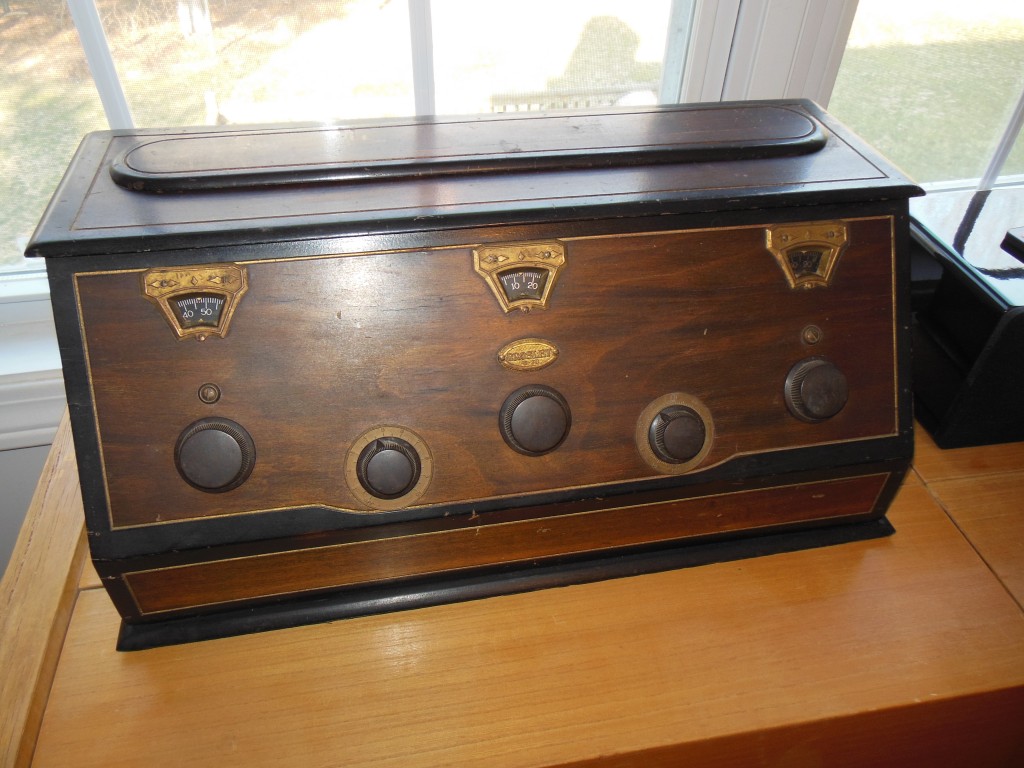 This is the Crosley model 5-38. Five tubes and $38. Crosley was known for making radios affordable for everyone. Maybe a little cleaning, Old English and lemon oil will be enough to hide the scratches.

The first one I noticed was a Crosley 5-38. It’s an old wooden slant top battery radio from 1926. It had five UX201A Globe tubes with it. The seller claimed that they were all good and that the two audio transformers were also good. I made the deal for $60. If the tubes are good (I have not checked yet) they are worth at least $15 each. What are my chances? This Crosley is a Tuned Radio Frequency (TRF) radio that also has a feedback amplification stage, otherwise known as regeneration. That means it combines two different styles of amplification and tuning. The three TRF stages all have their own separate dials. I’ll try to update this post in the future when I get a chance to inspect this radio properly. For now I know that it is a good-looking radio that just needs a bit of cleaning and polishing to make it look almost new. Then I have to build the power supply kit that I have in the closet and I will be ready for the big test.

That little Crosley weighs just about 6 pounds. The light weight is partly due to the fact that it does not have a power supply. The next radio that intrigued me, a Kolster K-21, was also a TRF (Tuned Radio Frequency) radio but it was much more advanced than the Crosley. The Kolster is set into a cabinet made of wood with a metal frame. The top is hinged and lifts up for access to the 8 tubes within. Although the Kolster is also a three-stage TRF it has just one dial to turn all three tuning capacitors. This is because they are ganged together and thus rotate in unison. This 1928 radio also has its own internal power supply that provides all the required voltages by routing the AC wall current through a transformer which is tapped for the various voltages. The tubes are also specific to AC power. They were designed to help eliminate the 60 Hz hum that AC creates. Weight? It has to be between 60 and 80 pounds. I had to rest this one on my knee several times while carrying it out to the truck. I could almost see the headline in the Monday newspaper: “RI Man has Fatal Heart Attack while carrying 1928 Radio”. The shape of the radio and the way the top is hinged has led to this style being called “coffin radios”. Fortunately I did not collapse while carrying the coffin radio. Look closely at the intricate detail on the cabinet. This thing is a work of art! And do you see those feet? It has four real feet with little toes sticking out. They are made of brass. All this for a mere $25! 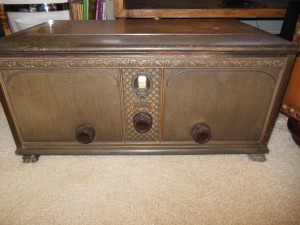 With a little work I may be able to improve the look of the wood without refinishing. So much to do! 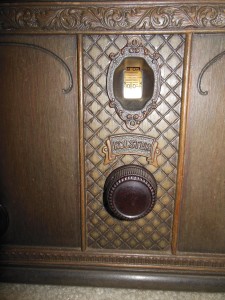 The tuning dial actuates a drum seen in the window. Unfortunately the dial string is binding. 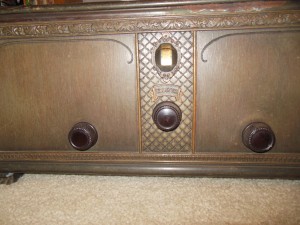 A closeup of a very stylish radio. Radios like this are not very popular because they are a bit large and very heavy. That means I don’t have to pay a lot of money for a nice example. 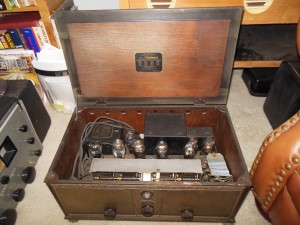 That’s right, it opens just like a coffin. The build quality is amazing. Notice the metal frame that the wood cabinet is built around.

Instead of a UPC sticker with brief model information this is a brass plate with full patent history. Flash glare hides the serial number.

An inspection tag that is nearly 100 years old. Observe this in large size by clicking on the image. You will easily make out the date. 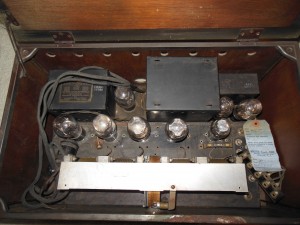 It looks like three sets of transformers in the back. The no. 80 rectifier tube is seen to the back left. This radio was made at the time of the transition from battery to mains for powering home radios. 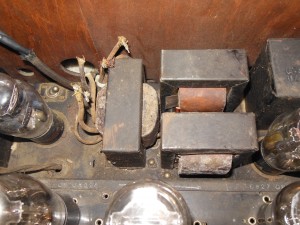 The large black cover over these transformers has been removed. The transformer on the left has unsoldered leads. I have not tested it yet.

After walking around the room twice I decided to slow down and look more closely. There must be a few more inexpensive but desirable radios that I missed. Then I spotted a bathtub radio. All metal with a metal top. Take the top off and you have a bathtub. Of course that is not what it was called. It was an Atwater Kent Model 40. I already had a working Model 44 at home. The 44 and the 40 look very similar but the 40 is only about two-thirds as long as the 44. This one was in pristine condition. It had a mostly brown crackle case with a green panel on top. In the middle of the green top panel is a huge gold emblem. The inside was especially clean and all 7 tubes were present. The sign on the radio said “restored”. That was a switch. The price for this beautiful AC gem? A mere $25! I took it right away. Off to the truck again. This time the total weight was only about 35 pounds. 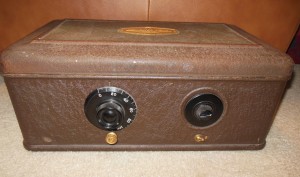 This radio is in very nice condition, inside and out. I just wish vendors would avoid placing tape of any kind on a radio. Tags and strings are the way to go. The blue color is from masking tape. 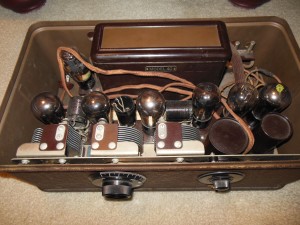 How’s that for a nice interior? Lifting the cover of the capacitor block in the back will reveal several modern electrolytic capacitors that have been added. 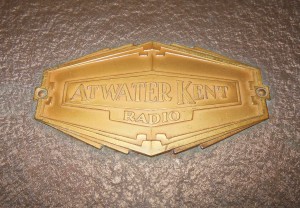 AK was noted for mass production and quality. That sure is a nice emblem, even after 90 years of use. 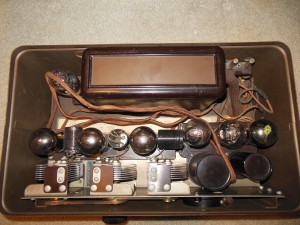 I know, same view as a previous photo. I just had to show it with a little different lighting. I really like this radio.

By now I pretty much had my fill of old radios. I was beginning to think about where I was going to put all of them. That’s when I came to the table that had some radios with the word “Free” written on their tags. I could handle that! The vendor had two 1940’s Motorola police squad car transmitters (model T69-20A), or that’s what it looked like. I have since inspected them more closely and I believe that one box is the transmitter and the other is the power supply. I like old cars. I’m even in an old car club. These were the perfect item for a radio-collecting car nut. I might even use them as props for an upcoming presentation on radio collecting that I will be giving to the car club (the Westerly Pawcatuck Region AACA). Oh, when boxed they weighed about 50 pounds. The final trip to the truck almost did me in. 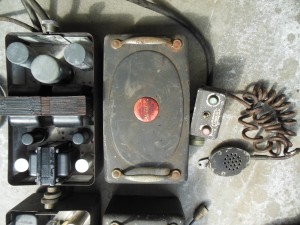 A closer look at the power supply and the control head. 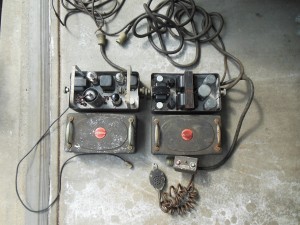 Together these two units weigh about 50 pounds. The emblem on both indicate that they are transmitters. Notice the microphone in the foreground. 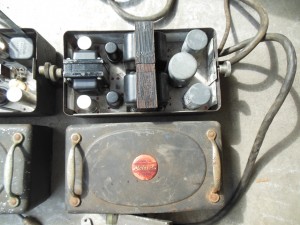 This is likely the power supply that provides the necessary high voltages. The car battery would have been only a 6 volt unit. It appears there are two vibrators here. One may be a spare. 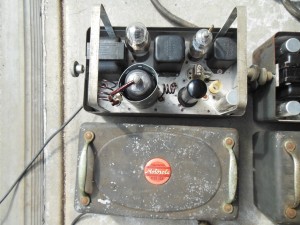 This is the unit seen on the left in the previous photo. I believe this is the actual transmitter.

Note: All of the above photographs can be clicked on to see an enlarged version.

Geoff Fors, WB6NVH has a nice website that discusses Motorola transmitters and receivers used by the California Highway Patrol.

KD6FW/R discussing the speaker that goes with Kolster K-21

Atwater Kent Model 40 in action at a site dedicated to AK radios.