The TV that Followed Me Home 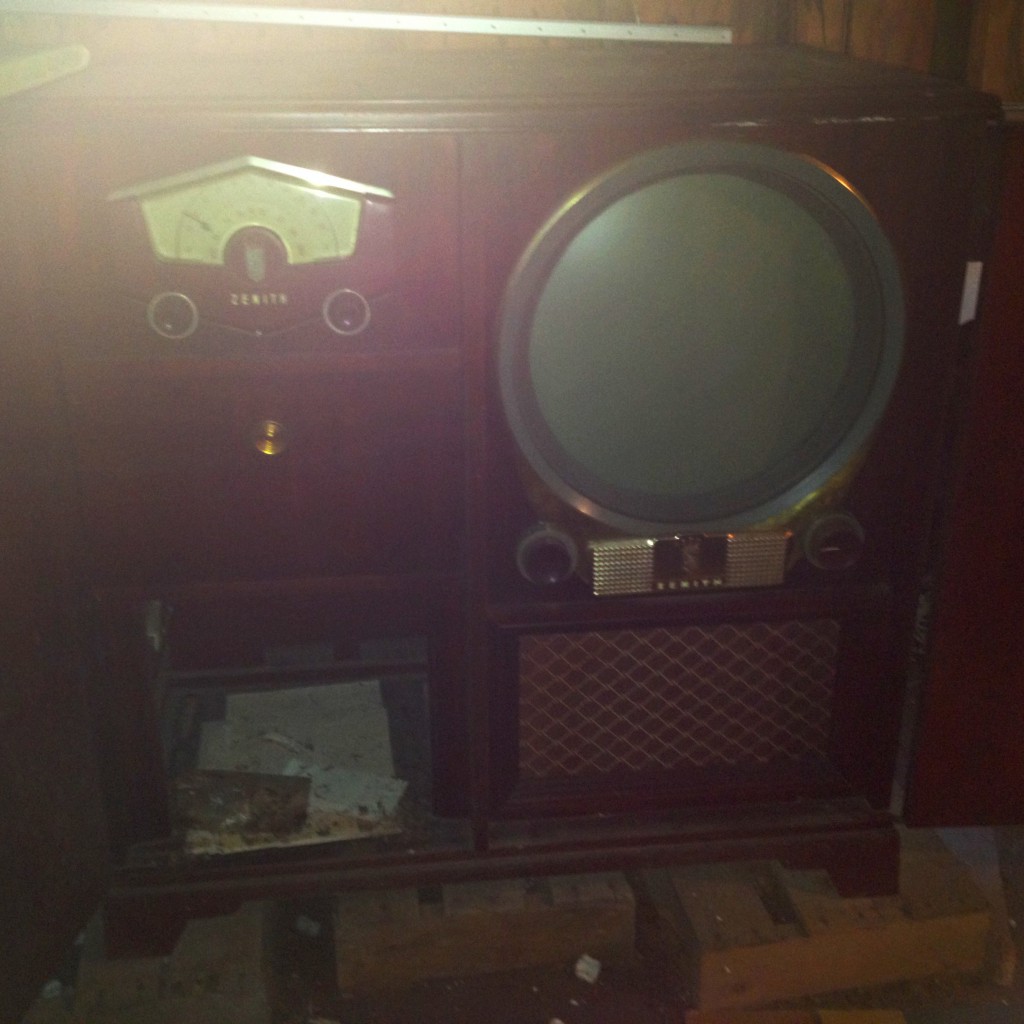 My first murky photo of the mysterious Zenith entertainment center, top of the line stuff for 1951. The trash in the lower left turned out to be Photofact Folders that had suffered the abuse of resident mice. All I had on hand was an iPhone camera!

Moving can be a terrible experience. I’ve only done it twice in the last 40 years. The first time was after one year of marriage. The second time was 33 years later. Guess which move was easier.

We got to the point where many things were sold, given away, or dumped. I don’t wish the experience on anyone, especially someone who collects big old radios like I do.

Duffy, a friend of mine who is also a radio collector (accumulator), recently made the move from Rhode Island to Tennessee. He had a basement and a garage full of old radios and TV’s. He could not possibly take them all. He had no inclination to attempt to sell them, especially since they would have to go to someone who can repair them. Those kinds of collectors are fewer than you might think. Duffy told me that most were working when they went into storage. When he offered to give me a radio or two I readily accepted.

Some of the radios were cute little things. Most were massive (as in it takes at least two people to carry them down to the basement). Included in the massive group were an E. H. Scott Allwave Deluxe and an RCA Berkshire. I’ll write more about them in a future post. This story is about the one I did not want to take. It’s a Zenith model H3267R entertainment center.

The model H3267R is a huge mahogany cabinet that contains an AM/FM radio, a Cobra-Matic turntable, a 12” speaker, and a 16” porthole-style television. It was in Duffy’s garage. It apparently was home to a number of itinerant mice for a number of years. They left their calling cards everywhere. I went to look at it even though I was not very interested in taking it home. I found a massive but strangely interesting piece. The nice condition of the cabinet and the round TV screen reeled me in. Duffy and I attempted to lift one end of it. It did not budge. If I was going to get this thing home it would have to move 20 feet to the entrance of Duffy’s garage and then 3 more feet straight up to get into my truck. There was no way we were equipped for the move. I told Duffy that if I decided to take it home I would come on another day when I could bring some helpers. Well, I did return after Duffy had moved. I came back alone but this time I brought tools and a two-wheel hand truck. I removed every piece of electronics from the unit. This reduced the weight considerably. Then I tilted it onto the hand truck and wheeled over to my pickup. First I tilted one end onto the tailgate and dropped the other end on top of a big 2-foot tall plastic bucket. Then I was able to lift the bucket end and slide the cabinet into the truck bed. The power supply, record player, TV, and radio were all loaded up and off I went. I managed to reverse the procedure at home and get the console stored in my shed where it now awaits restoration. I hope to at least clean up the cabinet and get the power supply, radio, and record player working. I’ve never worked on a TV before. This should be fun. I don’t know a flyback from picture tube restorer.

The photo gallery below will give you a better idea of what this curious relic of the 1950’s looks like. In those days TV’s were in real wood cabinets that often had doors. I remember the one we had back in 1954 (I can’t recall the brand, I was not yet reading ). It had two doors that opened to reveal the TV screen. I don’t remember if it was round or rectangular. Well, now I have a round one, AKA  a porthole screen. Now where can it fit in our house? I think I’ll ask my wife. On second thought I’ll put that conversation on hold.

Note: Clicking on a photo will open a window with an enlarged view. 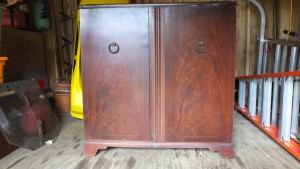 The mahogany cabinet is in nice condition. The veneer is almost perfect and requires gluing only on the left door. This was the dominant furniture style in the late ’40’s and early 1950’s. 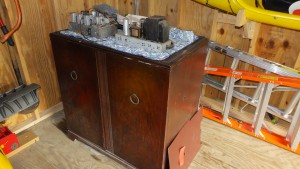 All of the parts including backboards and grills are present. Here the power supply and radio are seen on the top of the console. 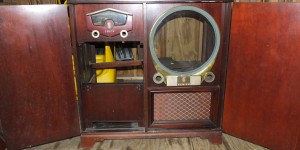 I had to remove almost everything from the cabinet to reduce the weight before attempting to lift this vintage furniture into the truck. 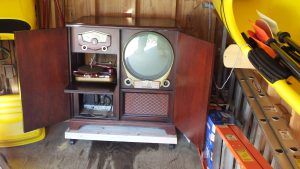 Here I have put all the components back into the cabinet where they will wait for restoration. The unit now sits on movable platform. 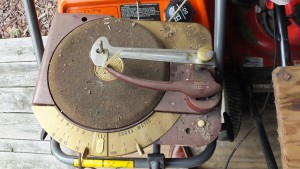 The famous Cobra-Matic phonograph was covered in mouse feces. 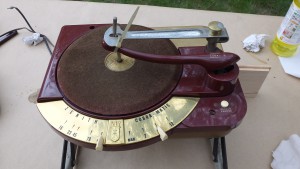 I did a quick cleanup of the turntable. That Bakelite looks nice. I hope this unit still functions! I won’t dare test anything until I have rebuilt the power supply. 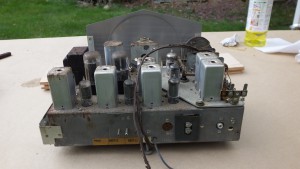 This is a top view of the AM/FM radio. It has the modern FM band and thus will be able to receive current stations. Lots of rust from mouse urine here. I especially don’t like the looks of the transformer. 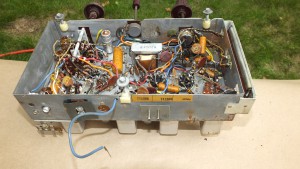 The underside of the radio is in nice shape. These capacitors will be easy to replace. 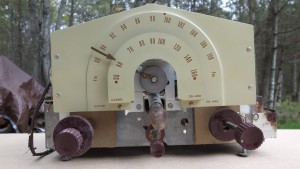 The face of the radio was covered by the glass plate and it did a good preservation job. Notice the modern FM band frequencies. 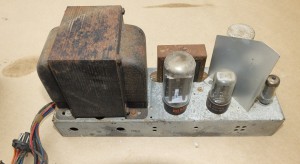 This is the radio power supply. Again, those transformers took the brunt of the rodent assault. I’ll bet it tests good anyways! 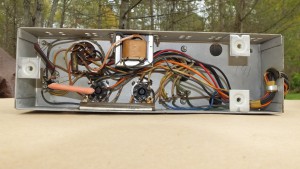 The power supply looks good underneath. Mice were not able to get in here. Notice the large metal resistor pack in the front. It also appears to be good. 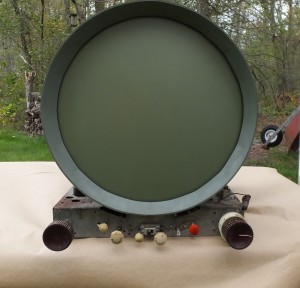 It would be cool if someday I could feed old episodes of the Honeymooners to this picture tube. 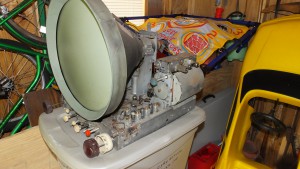 I believe that cylinder in the back is the tuner (station changer). Very few tubes are missing. Very few tubes say Zenith on them. Most have been replaced at one time or another. 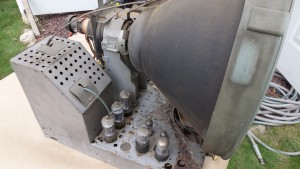 Another view of the picture tube. When I was a kid we had to call the TV repairman often. My parents always dreaded the words “It needs a new picture tube”. 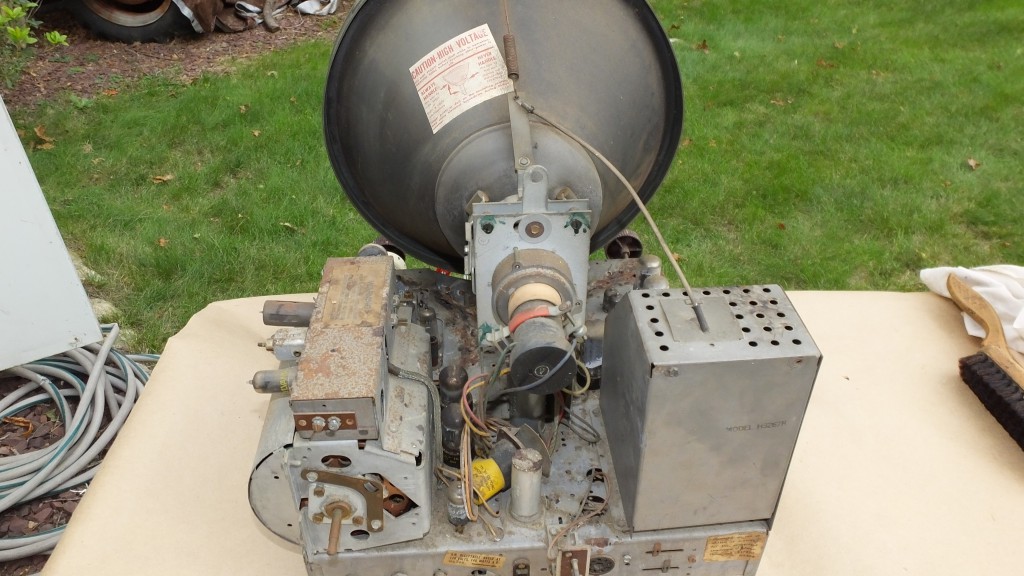 I believe that yellow thing dangling by some wires is a picture tube booster. It is a sure sign that this tube was failing. 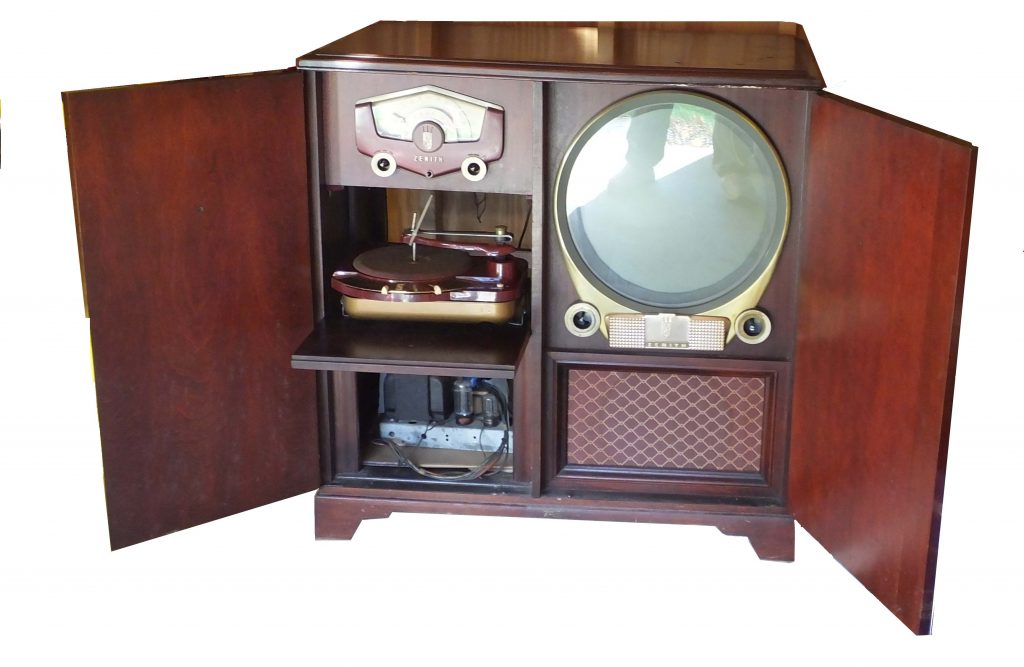 This photo does a better job of showing the entire console. I used Photoshop to remove the distracting background.