Ever since the year I gave my wife a Kodak electronic picture frame for Christmas I always make sure to ask her what she wants. That includes birthdays. This year was no different. My wife turned ____ in July (I’ve also learned not to divulge certain information without first obtaining written consent). She promptly gave me her birthday list: one fire pit, fully assembled.

Well, purchasing the fire pit was easy. Getting it home was sweaty. Building it was the problem. You see, I’ve had this 80 meter DX (OCFD) Windom antenna sitting in a bag for about 4 years. This year I finally decided to put it up. It just so happens that the antenna project was still in-process at the same time that Camille expected me to build the fire pit. I started the antenna project 4 years ago by purchasing the unused antenna for less than half price from another ham. 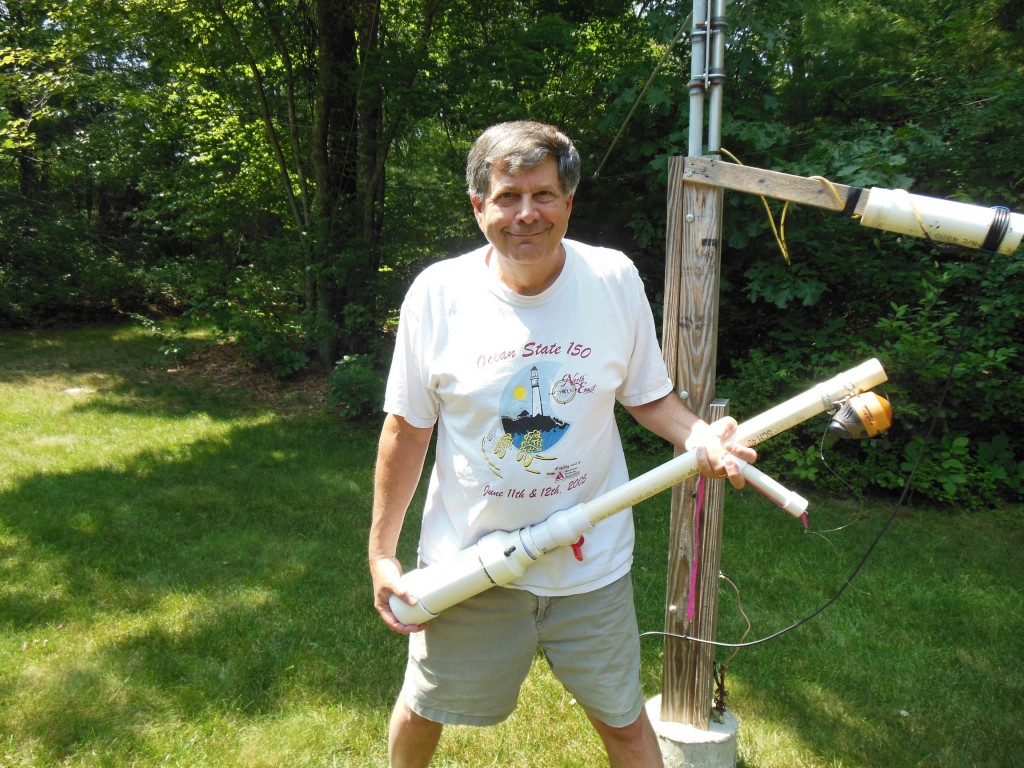 This is the antenna launcher. The item in my left hand is the dart with a streamer made from an old shirt. My launcher leaks because I did not properly coat and/or twist one junction. It still launches to about 100 feet. I need to improve my technique for making PVC joints. (in the background is Gap Titan DX vertical)

Then last Christmas Mrs. Christmas brought me an antenna gun, The Joplin ARC Antenna Launcher (I like ‘antenna gun’ better). I finally had something that might be able to get a wire antenna higher than 20 feet off the ground. I built the launcher kit sometime in the spring. I then purchased a small air compressor. This would be used to fill the launcher air tank. I also use it for blowing up tires (like the one on the wheelbarrow that I needed to carry the stones used to make the fire pit) and for cleaning car parts (like the carburetor I am working on).

Well, I got the long leg (about 96 feet) of the OCFD (Off Center Fed Dipole) up in a tree at about 35-40 feet. The center insulator and balun was shot up to a smaller tree and was only about 20 feet up. 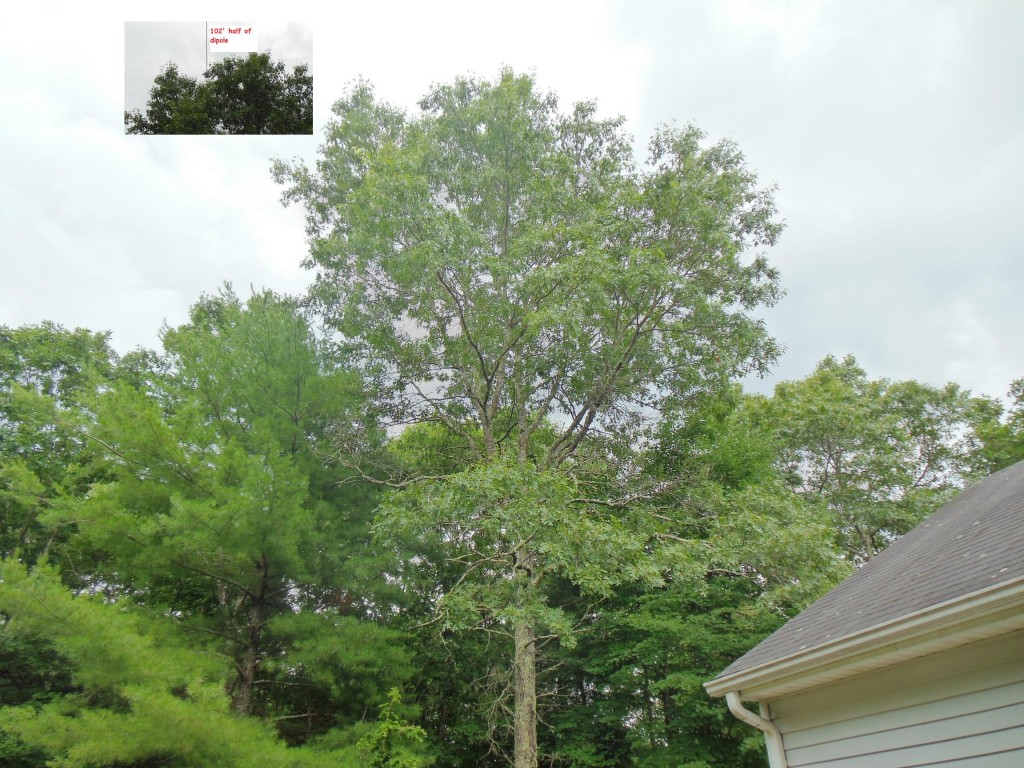 This tree supports the long (102′) end of the antenna. Insert shows the antenna wire not visible in the large photo. A window sash weight holds down this end. It is probably over 40 feet up.

The short end (30 feet) of the antenna went down at about 45 degrees just like an inverted V and ended up only ten feet off the ground at its terminus. This created an antenna that sagged down to about 20 feet near its middle. I tested the antenna and the only place it came close to loading with low SWR was on 40 meters. 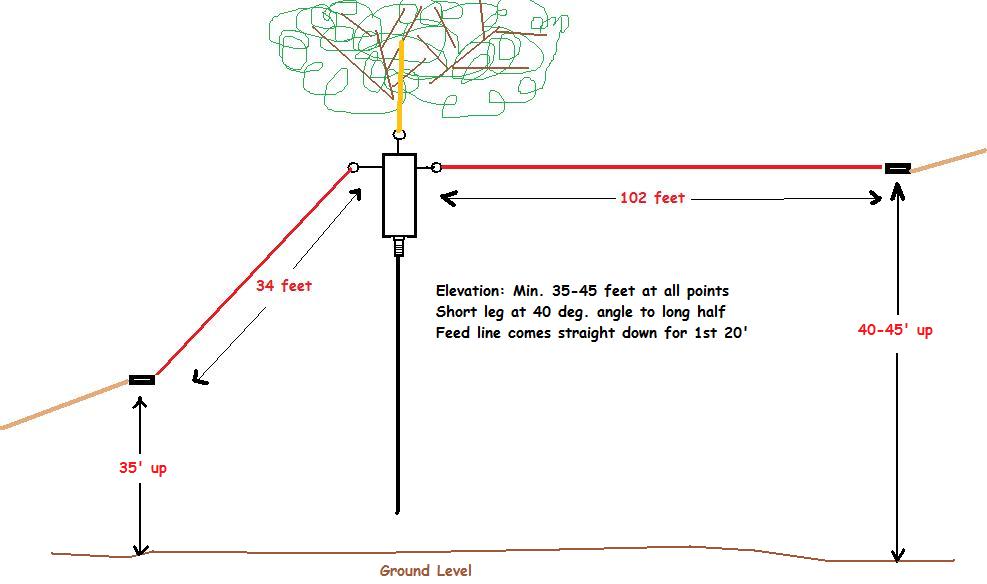 The second try worked a little better. I took down the center insulator and then put it back up on the tree that used to hold the 34 foot segment. This time I got it to the 35-40 foot level. I tested this configuration and found that the antenna had an SWR below 3:1 on 4 bands. Not bad! 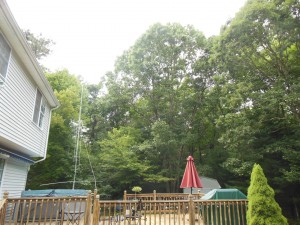 The short (34′) end goes off to the left and behind the Gap vertical. The feed line is easily seen here. It comes straight down for at least 20 feet. 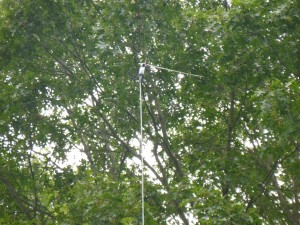 Look closely and you can see the feed point. The short end goes to the left. The long end of the wire antenna is not visible although the rope supporting the balun/center insulator can be seen pointing to the right.

Now all I needed to do was to raise the final leg to the top of a pine tree that was at a 40 degree turn from the feed-point. This was not ideal but it was better than chancing the only remaining trees that were in line with the antenna but deep in the woods. I like to reduce the chances of limbs falling on or touching the antenna, insulated or not.

Unfortunately I was also deep into erecting the fire pit at this time. The area was cleared and I had a basic ring put together. The problem was that nothing was level. I had to get the first tier level before adding two and three. Handling heavy paving bricks is exhausting work in 89 degree heat. It’s not as much fun as launching a PVC dart and fishing line 100 feet into the air. What to do? Which project comes first?

This morning my wife left home early to head for her class at the gym. That meant that I was alone for about 2 hours. Maybe I could work on the antenna, finish that, and then arrange it so that just as she returned she would see me on my knees around the fire pit. It almost worked. 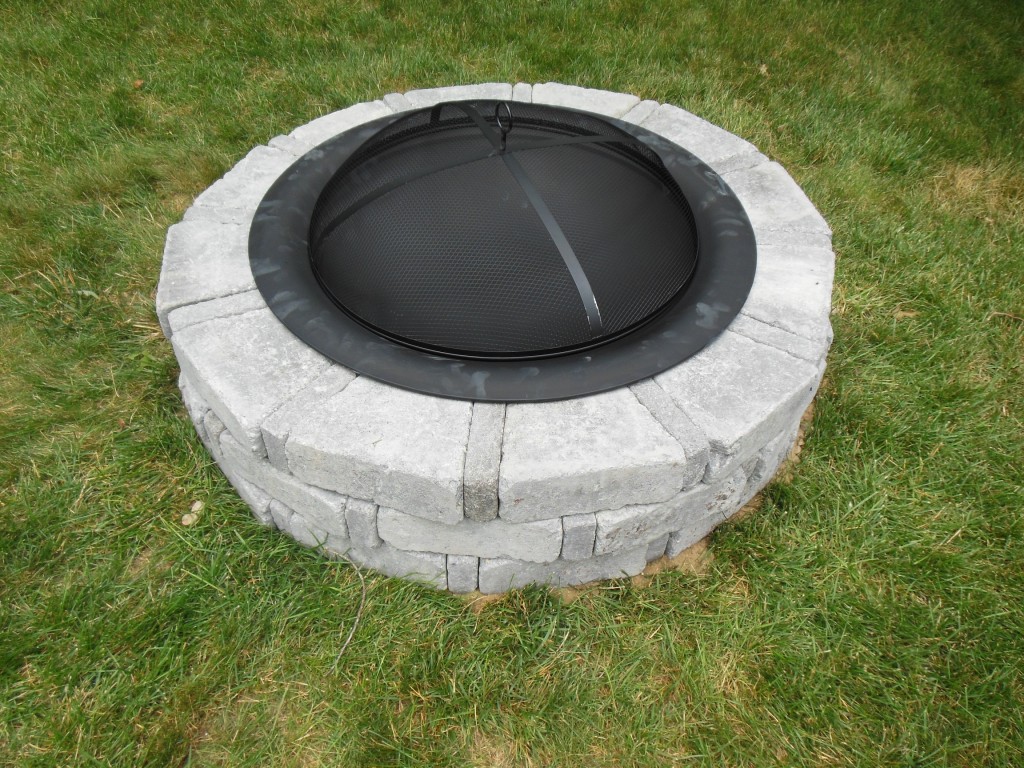 My wife was happy with the fire pit. It is right under the Windom. Maybe a little smoke will enhance the signal?

I completed the antenna install and then went inside for some iced tea. That’s when Camille came home. Well, I promised to get that pit done so out I went. It took a couple more hours to get everything level and tight. We now have a fire pit right below a 80 meter Windom antenna. I wonder if the smoke will affect the insulation on the antenna wire?

Last night I had a pleasant and long QSO with Mike, W1BNC, on 80 meters. I was running barefoot and he had armchair copy for the entire time. It wasn’t a long distance (80 miles from Hope Valley, RI to Southborough, MA) but it sure was a quality QSO on a noisy band. This antenna made it easy.

Article, History: From Windom Antenna to Multiband OFCD; fantastic resource which has and extensive bibliography.