The snow outside my window is melting quickly (although there may be more on the way) and the first day of spring is only three days away. Lately my spare time has been taken up with working on an old E. H. Scott Philharmonic radio. I have it running now and just have to put in those final capacitors and do an alignment. That’s the perfect activity for cold winter days. As the days get longer and warmer my energy will likely become more focused on the ’41 Buick. I have a very ambitious list of improvements that need to be attempted this summer. But what about now? Well, how about a blog describing some fun items that can add a historical perspective to any vintage vehicle?

The first thing that comes to mind is license plates (some people call them tags). I have been accumulating these for many years, even when I did not own a vintage vehicle. 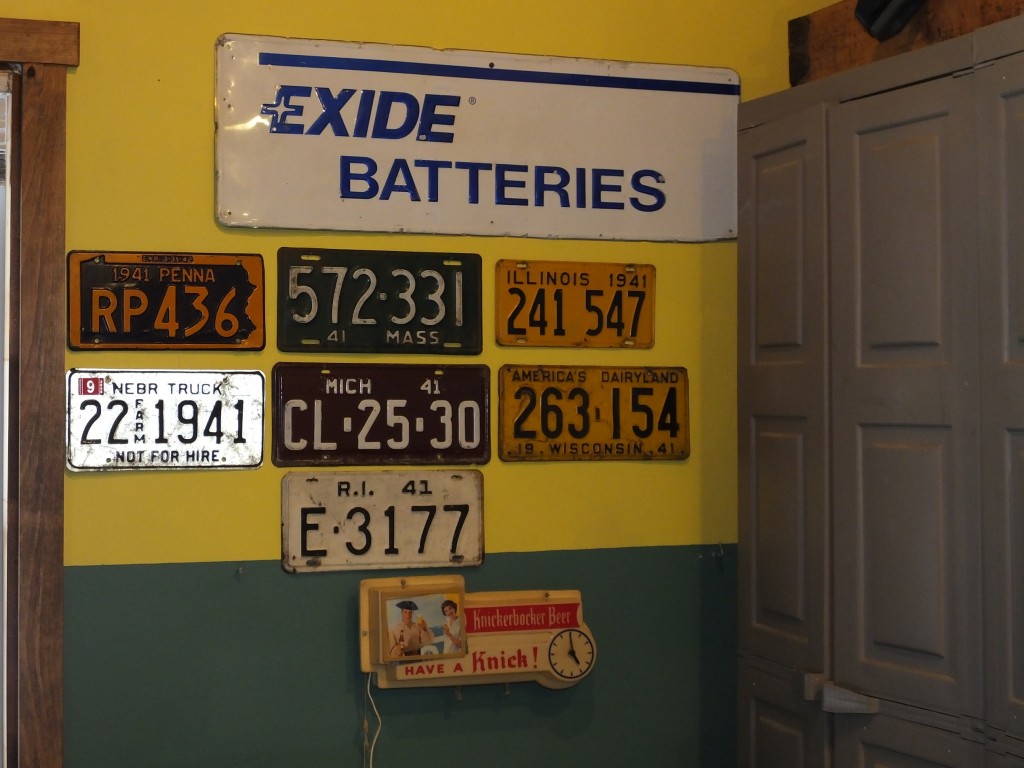 The state-to-state variety of license plate design is clearly evident in this small sample. These are all front and back pairs except the farm plate which is a modern one that just happened to have ‘1941’ in its registration.

Lately I have specialized in plates from 1941, the year my Buick Roadmaster was manufactured. They make a nice display right above the tool crib. I was lucky to find that Nebraska tag with the ‘1941’ as part of the registration.

Open a glove compartment on a modern car and you are more likely to find a GPS unit rather than a road map. When I was a kid all road maps were free for the taking at service stations. Most maps were provided by the major petrol companies such as Shell, Esso, Tydol, Conoco, Gulf, Standard, and Richfield, among others. 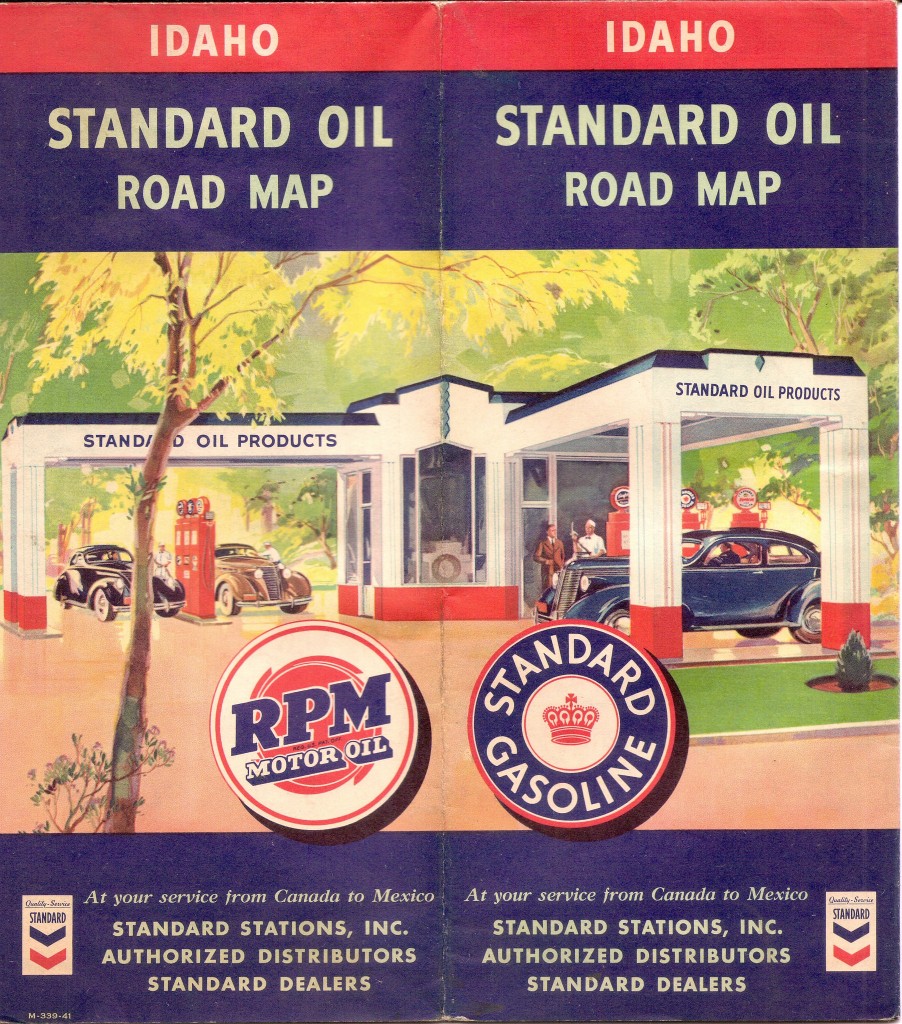 This same scene appeared on many different state maps. Notice the circular logos for RPM Motor Oil and Standard Gasoline. I have a Montana map with the same illustration but the brands are RPM Motor Oil and Calso Gasoline rather than Standard. States west of MT sold ‘Standard’ while MT, WY, ND, SD, CO & NE sold Calso

Then there were the state maps (still available for free in most states). The date of publication for most maps can be found if you look closely at the map legend. Many of them have the year in bold characters across the front of the map. I like the ones that have especially interesting graphics that feature cars and service stations. These travel maps often had colorful pictures on the map to point out attractions (Points of Interest for you GPS people). I have even found maps that listed all of the radio stations in nearby states, of special interest to radio collectors like me. Since we are talking about 1941 in my case, there was a war going on. Some of the available maps displayed the entire war theater with captions that consisted of recent news from the battlefield.

This Global War Map from the 1940’s was provided by WOR radio station of New York. They were “First with the invasion news…Keep your dial at 71 ; 24 Hours a Day”. They are still on the air!

Then there were the promotional items at the filling stations. Today you expect model cars and beach balls offered for sale. How about a game of chance at no cost to you? Take a look at this neat punch card provided free of cost by your considerate Richfield Oil dealer.
A metal disk has embedded rolled papers that you punch out to see what you win. There is also a log to keep track of all of your purchases so you can get customer loyalty rewards. 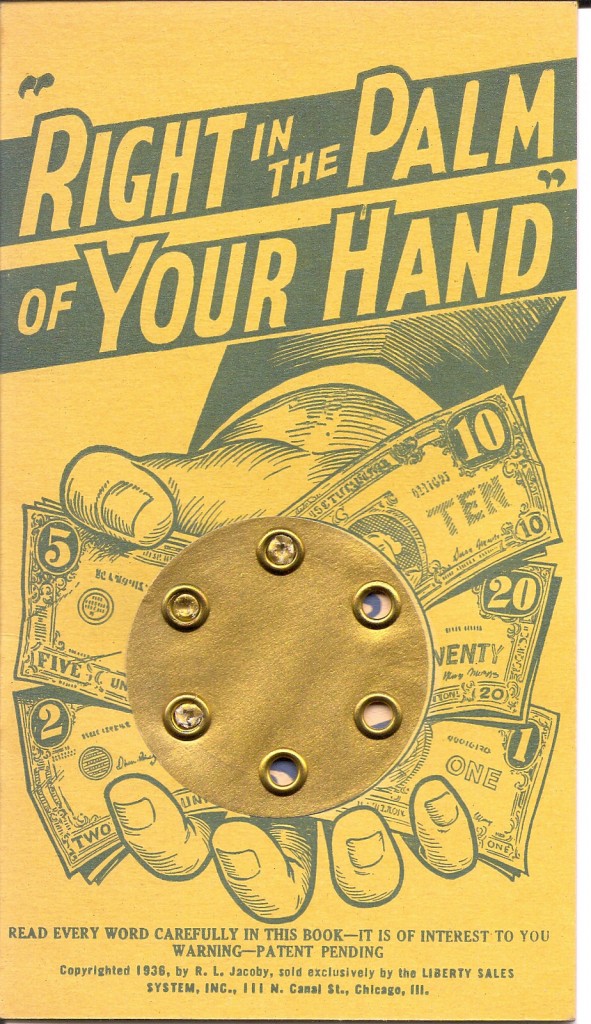 I really like the graphics on this item. Look at that cool bright disk with all the cash radiating from it. Look closely to see which papers have been punched. 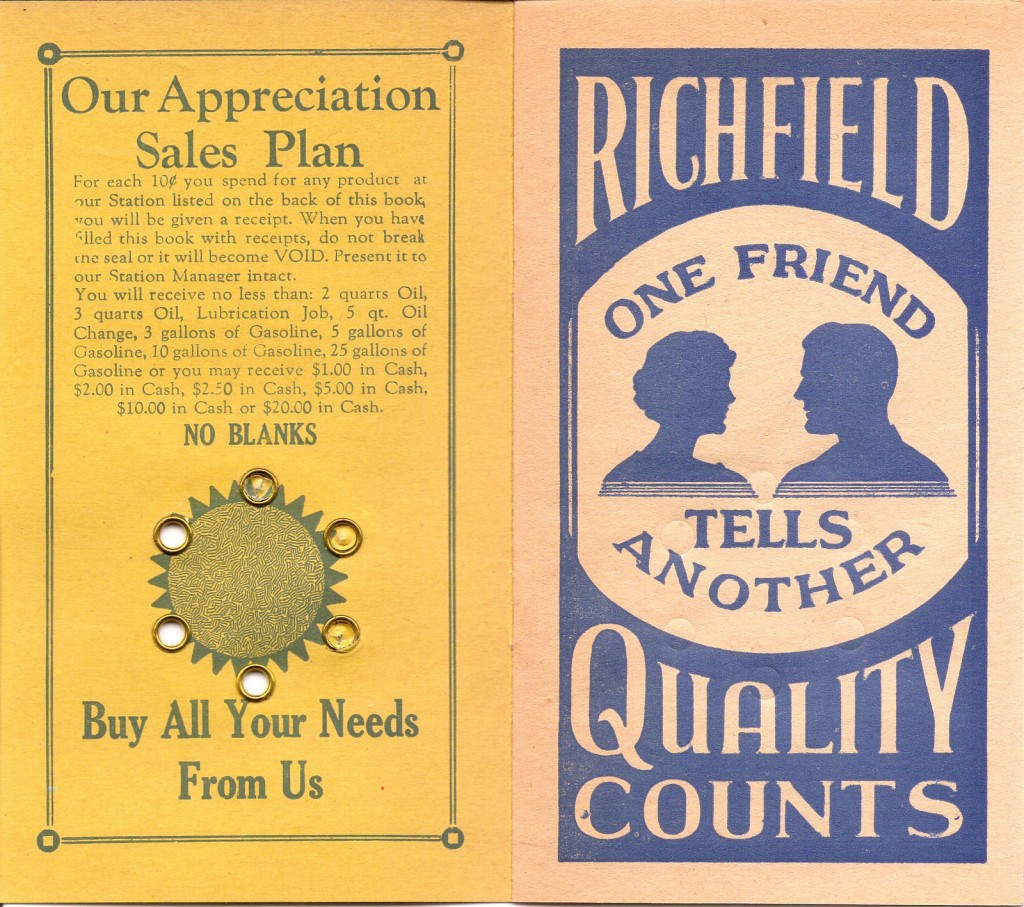 This is the back of the Richfield punch card. It explains the reward program. I must admit that I still don’t understand exactly how it worked.

Back in the ’40’s people did visit national parks and take picnics, even though it was more difficult to do since gasoline was rationed. The last time I went to Yellowstone National Park (1975) they were still handing out leaflets with warnings about bears and their ability to spoil a picnic. 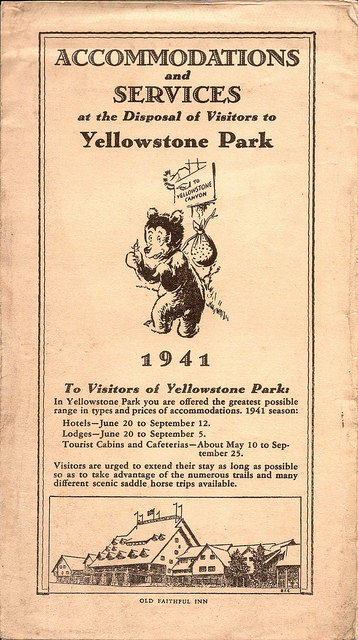 Watch out for those bears! And be careful where you choose to spread your picnic blanket.

This little brochure pictured to the left was printed on inexpensive paper but it has held up well. It’s a great glove box item; although, I keep it in my Buick album.

By the 1940’s most cars were available with an optional radio. It was generally not a standard item. Portable radios were also available and they were the ideal item to take to a picnic. Although some of them were made of various plastics, including Bakelite, many were still made of more conventional materials such as fabric-covered wood. The radio usually required at least two batteries (A and B) to support the power-hungry tubes. Portables also came with a handle and simple controls for accessing the AM broadcast band. The radio I have pictured here is a Philco model 40-81. The ’40’ indicates that it was a 1940 model, just the right item to find in the trunk of a 1941 Buick. It would be a great performer around home but I suspect there would be very few available stations in the area of Yellowstone Park. 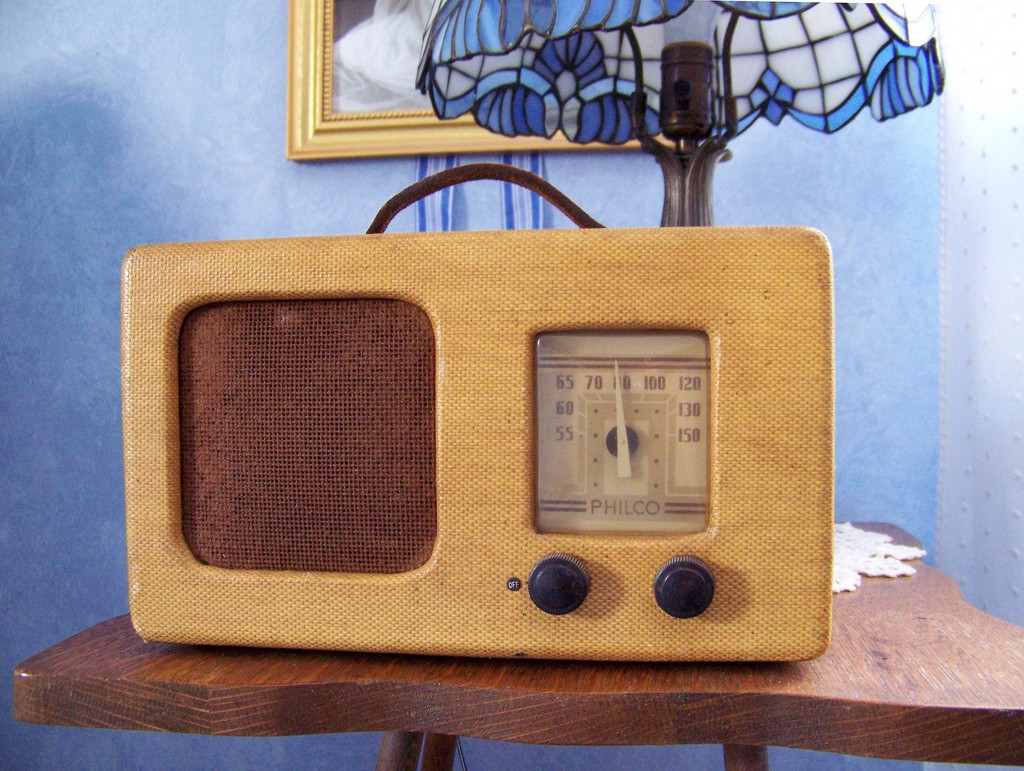 The Philco 40-81 portable AM radio, an ideal companion piece for a ride in the country. The On/Off/Volume control is on the left. Notice that it has a small pointer. If the pointer is lined up with the dot to the left of the knob, the radio is off. This helped prevent draining the battery by forgetting to turn the radio fully off. Today we use LED lights.

That’s enough for now. A future blog will continue this theme. It will focus more on those items that came with the car or were legal requirements of ownership. You would be surprised to see what was included with a brand new Buick in 1941.

If this post was helpful, please consider commenting or letting others know about it by using the social media button found below. Thanks!